Something is Killing the Children #1 (Review) 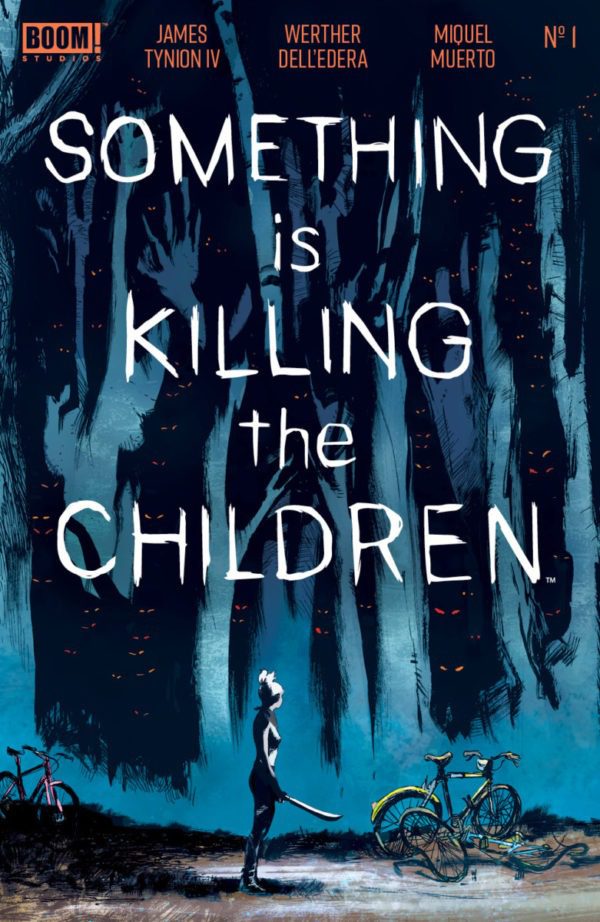 Something is Killing the Children #1
Boom Studios

Mark my words, this series will become a Hollywood film in the next three years. I don’t have any insider knowledge, the creators haven’t made any statements to that effect, but the proof is in the work. This is the best horror comic to come out of comics in the last twelve months. This is Stranger Things meets 70’s grind house cinema and every freaking page is worth its weight in gold for the perfect set-up for a horror classic in the making.

The story starts off simple enough. A group of boys are having a late night session of truth or dare at a sleepover. The game takes an eerie turn as James is dared to tell the group about the time he was most afraid. He spins a yarn about how he had seen a strange supernatural figure outside of the house just a few nights before and this figure James believes lives in the nearby ravine.

Cut to an interrogation room where a traumatized James relays the events to an officer. The other boys are missing. And that’s where this comic gets interesting.

I refuse to spoil the plot any further. To do so would be a giant disservice to the readers and the creative team. But this first installment has all the makings of becoming something very different from the usual fare that Boom produces. This comic is more in line with The Walking Dead than Adventure Time. This is not only a must read for this week, but a series that you should keep your eye on in the coming months as this could be a giant breakout hit for the Indy publisher.

The creative team is pulling all the right strings on this mystery. Tynion is no stranger to working up a good drama after spending the last few years in the Batman universe. But this series is something very different than what I expected from the writer. This could be the push that Tynion needs to step out of fellow writer and friend Scott Snyder’s shadow. The set up is perfect, the plot moves at a brisk pace, and the questions that this first issue raises are going to leave readers coming back because they will demand answers.

The art of Dell’ Edera is offbeat and unusual. I know that this sounds laughable, but this style reminds me of Tim Sale’s artwork. There is a similarity in the way that both artist render faces and use shadow in their work. There are moments of graphic violence that are haunting because of this artist’s non-traditional line work and thick use of inks. The images stay with you long after the book is closed. While I won’t put it on par with The Long Halloween, a comparison that comes to mind because of Tim Sale, I will say that Werther is on the right track to becoming a superstar of equal renown.

This eerie mood and sinister feeling wouldn’t be possible with the efforts of the right colorist. Muerto is the real star of this issue, taking the creepy images and story-line and placing just the right tones of blues and greens to fit the situation and environment to make the panels and pages pop. And when blood flows in this issue you focus in on it as it stands out in sharp contrast to the rest of the muted tones used in the comic.

This is one of those comics that you can feel is different and special the moment you dive in. By the last page you can feel that magic building; this is a comic that has a great story to tell. I’m sure that I’m not the only one to fawn over this issue, but I’ll bet that it is a sleeper that most collectors and readers will let pass without much celebration; it’ll only be after this series has really got rolling that the general public will jump on the band wagon and issue one will need a third and fourth printing.

As long as Tynion can keep the thrills and chills coming and keep up this momentum I think its a safe bet that Boom and the creative team have a future winner on their hands.

This is also the kind of chilling that I could easily see translated to a film. Hell! the first issue is twenty minutes of screen time that could build beautifully into a monster/horror classic. That’s why I say it will be on the big screen in three years. It’s too good to pass up.

While the comic does have few minor flaws here and there, the overall feel and look of the book are going to carry it to a high score and recommendation from me. Just in time for Halloween comes the next great horror comic. Enjoy and keep the lights on! OH! And keep an eye on the blonde with the duel machetes. Something tells me we may have a new bad-ass in comics.

Boom Studios James Tynion IV review
Are you an Insider?News, reviews, & updates are just the beginning.