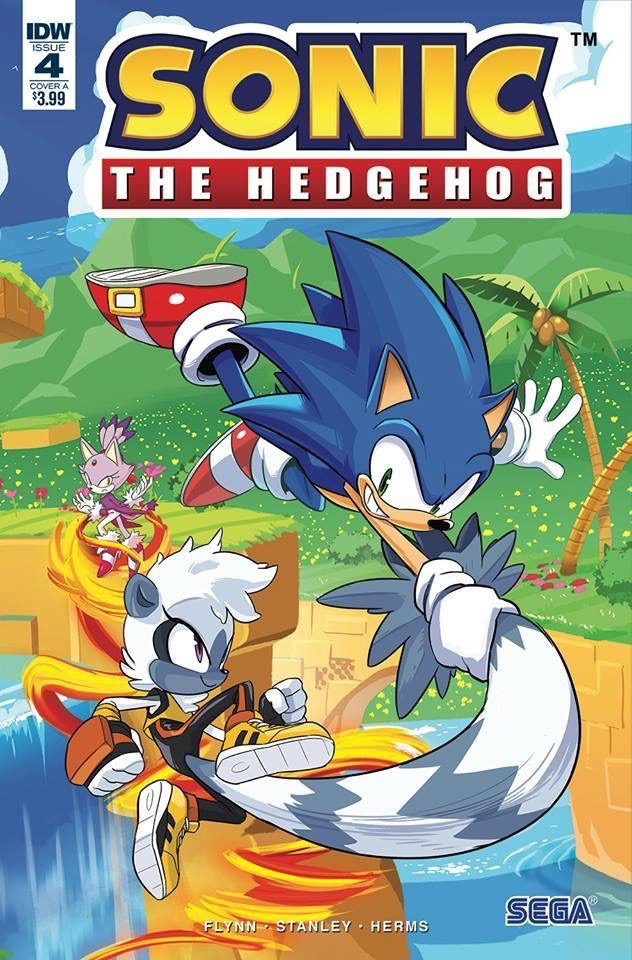 The new Sonic the Hedgehog series has been leaving me wanting more as I have felt a bit underwhelmed with the series so far. That has changed a bit with issue 4 now though. This issue focuses on Sonic saving another town with a new friend and an old one. We first meet Tangle the Lemur and later on Blaze the Cat joins in. What I felt like what has been missing in the Sonic comics lately has been a certain kind of tone that I remember the previous series for and this issue feels like it has finally brought it back. There are more concerns now with the robot attacks and they now know if they don’t do something about it, they may get overwhelmed very fast after assessing how things with the current attack they just stopped. This issue is very much heavy with action, but we get just enough out of Tangle as she shows off her skills. We don’t get a lot of information about her, but she’s just another friend out looking to help to save everyone from Robotniks machines.

As soon as Blaze shows up, things begin to really heat up (pun intended) as the three of them work together to take down a massive drop ship that keeps filling the town with more robots. The beginning of this new series has definitely been a slow build but this issue ramps it up a bit with the action displayed and the seriousness of the situation at hand. Even though the issue was mostly filled with action, we still got fun interactions with the other characters, the jokes and quips were funny with that good cheese factor in them, and it all felt like it was progressing the bigger story much faster than the previous issues. I can’t say for now if this is a series for people that aren’t fans of the blue hedgehog, but this issue at least seems like it will not only please current and new fans of Sonic but will get them excited towards the next issue.

The world and characters are still bright and colorful like how they are depicted in the games and the action panels are the best of the series so far. If the creative team can keep this kind of a pace up with Sonic, I believe they will deliver the fun adventure that fans have come to love with the character as we seem only be a spin dash away from getting a big reveal for what’s coming next.