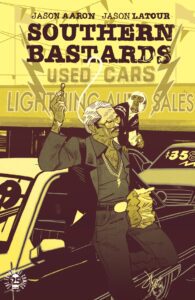 It’s been a long wait for fans of the “football murder comic” Southern Bastards. The last issue was published in January. I for one, have been patiently waiting to catch up with the complex citizens of Craw County Alabama and current series lead Coach Euless Boss. It took quite awhile to get here but did it deliver?

Picking up where it had left off, readers witness the unraveling of Coach Boss. Heavy is the head that wears the crown and in a land where high school football is religion, losses are nails on a cross. In the previous issue, Coach compromised his already crooked sense of morality with the brutal assault of an opposing player in an effort to steal a win. What started as a grudge on the gridiron has led to war. Cross county rival and fellow crime lord Col. Quick McKlusky will not allow the transgression to go unpunished. Coach Boss decides to douse the flames with the Colonel but may get blindsided by the enemies he’s accumulated at home.

This isn’t just pigskin and pandemonium. Sheriff Hardy actually shares what could be considered a tender moment with the Coach. Plus, those waiting to see Roberta Tubb exact her revenge over Earl’s murder get a taste of what’s to come.

Be warned, this is not a good jumping on point for new readers. Over the course of this run, writer Jason Aaron has done an outstanding job creating a compelling albeit deplorable cast of characters yet that makes this issue difficult to navigate for the uninitiated. It is part three of the arc after all. If you’re fresh to Southern Bastards, don’t fret. There are only seventeen issues so it’s not an overwhelming task to get caught up. You will also be rewarding yourself with an adult title that’s raw, unique and consistently excellent.

For the supporters of this comic, you’re already aware this is one of the finest creative teams in the business. While seriously late, artist Jason Latour decided to replace the letters column to explain the delay. Writing with sincerity, we’re informed he and editor Sebastian Girner had sadly lost their fathers while working on the book. Latour follows this with a heartfelt eulogy for his dad David.

Southern Bastards is currently solicited through November. Issue #17 feels like an invite to a family reunion attended solely by psychotics and I eagerly accept. Pick it up.