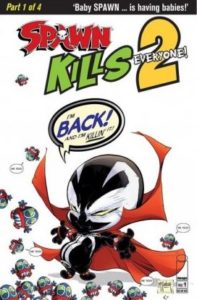 Written by: Todd McFarlane
Art by: Will Robson
Colors by: Greg Menzie
Letters by: Tom Orzechowski

Put simply, Spawn Kills Everyone 2 #1 was disappointing. Main reason being no one was killed. Heck, there wasn’t anything close to resembling a fight. When a character is set to “kill everyone” usually that entails some level of fighting.

A disappointing start to this four-issue series doesn’t guarantee Spawn Kills Everyone 2 will be a bust. In fact, Todd McFarlane could be setting things up for an amazing series. You’d just think a four-issue mini-series would need an entire issue to establish everything that’s about to happen.

Actually, the idea of Spawn killing anyone, never mind everyone, doesn’t even pop up until over midway through the issue and is only touched on lightly. It seems his motivation is because all the other heroes in the world are getting movies, while his movie’s filming has been put on hold until the summer of 2019.

Most of the issue was spent on his new fart-babies. They’ll probably play a role in all the killing. Not exactly something I’d deem necessary, but let’s see how Spawn Kills Everyone 2 #2 plays out.

Now, there were some positives in this issue. Spawn being aware of the real worlds and all the movies is great. McFarlane did an excellent job with that. The Doctor Doom, Doc Ock, Dr. Strange, and Doctor Fate appearances were all fine cameos. And I’d be lying if I didn’t admit to liking the corny play on words with each of their names. Also, the little Easter Eggs in Spawn’s contacts were a nice touch. In case you missed it, he had Venom and Savage Dragon in it, as well as the number to Blumhouse Productions, the company producing his movie. The acknowledgment of Jamie Foxx and Jeremy Renner and placing them in fake roles was fine, as well.

However, none of this was enough to compensate for the lack of fighting and the amount of time spent on Baby Spawn’s babies. Spawn Kills Everyone 2 needs to pick up the pace in the next issue.