As we previously reported, DC Comics has brought their pop-up shop to SXSW and treated fans to a slew of great surprises. We were able to visit opening day, and I gotta tell, they did not disappoint!

Upon entering, fans are greeted by multiple iconic Batman vehicles. Some of which fans have the opportunity to actually sit in for a photo. There was a large wall covered in donuts with Superman’s colors. The giant Superman statue from Batman V Superman was hovering over the venue. They also had a shop set up filmed with comics, shirts and Funko Pops for fans to buy.

My favorite part of all this came early Saturday morning, when we had the opportunity to attend the DC Press Breakfast Saturday morning to kick things off. At the event, a panel full of DC’s finest were present for a full-filled morning. The panel included Jim Lee, Dan Jurgens, Frank Miller Brian Michael Bendis, Krypton Executive Producer Cameron Welsh, and Series Writers Lina Patel and Nadria Tucker as they all discuss the importance and significance of Superman in our lives. IGN’s Laura Prudom moderated the panel. 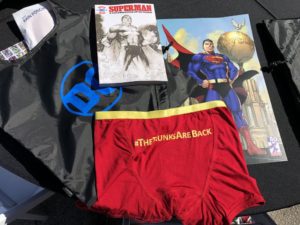 The writers and artists also stuck around throughout the day to sign books and collectibles for fans.

We received a lovely gift bag filled with an EXCLUSIVE Superman: A Celebration of 80 Years book, A Superman poster drawn by Jim Lee, Justice League Blu Ray, a rain coat and red trunks. Not a shirt, actual trunks. How awesome is that? It’s like DC knew I wanted to run around my house with just these and a red cape. Oh, got that image burned into your brain now? Ha, you’re welcome.

Check out some of the photos from the event below. If you are in the Austin area, I’d advise running downtown and checking out their venue while the festival is still running! They are also serving coffee and beer (for those 21+). If you do make it downtown, don’t forget to use the hashtag #TheTrunksAreBack when posting to social media.

If you are interested in the full video of the panel, expect it to go online any day now. I did record about 10 minutes worth live for Twitter, but that was before my battery began to take a turn for the worse. Again, SXSWers, this is one venue you don’t want to skip out on.