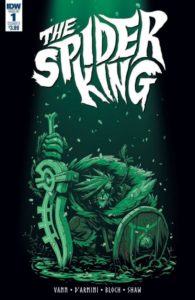 The Spider King #1 is a new story set in a time of war, kingdoms, and aliens. Hrolf becomes the newly appointed king at the beginning of our story. Currently, they’re at war with the opposition led by another family member. As far as what the war is about, it’s just the conventional conquest for control over more land. Hrolf as a king starts off very young and you can see that his inexperience has led him to where he is now by the time the issue ends. Even though he has the right men and has the right heart, he seems to lack the skill in planning out his battles to assure victory over his enemies. Later on, we meet a young princess name Sigrid. She has a great attitude about how things are in the kingdom because she see’s that this war will cost them greatly if something isn’t done. Her mindset for victory is all for the good of the people and I enjoy how she calls out the men who seem to care more about dying in battle than saving the kingdom.

If I had to compare her character with someone, the first one that comes to mind is Merida from the Disney film Brave. She has the capabilities to 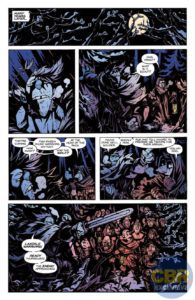 take care of herself and the only thing that can lead her down a wrong path is how far she would be willing to go to end the war. There’s a mild discussion of how they believe the war has to be fought versus doing what it takes to just end it. This can also be looked at as a clash with the mindset of a younger generation and older generation. Then you also have the part where the men aren’t happy that a young woman is talking down to them. Sigrid is definitely the standout character in the issue and I’m curious where she shall end up.

The alien that comes, later on, was definitely a surprise for me, seeing that I didn’t know what the issue was about going in. The way things end seems like we may have a new type of war coming into play and I’m not sure who we’ll have to lead the armies to protect the planet. The art in the issue does a fine job have to showcase how everyone just seems tired, cold, and messy. Colors are a bit on the darker side but it’s never completely muted, but I feel it helps set the tone of how no one here seems to be happy. If this run is able to keep its hook interesting and grow its characters well, we may have a fun journey ahead of us.

adrian block IDW josh vann simone d'armini the spider king
Are you an Insider?News, reviews, & updates are just the beginning.