Spider-man faces off against Mysterio in would could be the final hooray for Marvel and Sony pictures joint venture. Luckily for us starting September 17th on digital and October 1st on Blu-ray, Spider-Man: Far From Home can forever be enjoyed from the comfort of your couch, despite the wall-crawlers uncertain future. The billion dollar blockbuster drops on home release with a ton of bonus extras. Not only do you get to relive this spectacular film, but now you get to see how the brought your friendly neighborhood Spider-Man to life. Enjoy Spider-Man’s trek through Europe as he fights the villainous Mysterio while trying to just be a kid and relive the fun and adventure that comes along with it as Spider-Man: Far From Home, comes home on September 17th (Digital) and October 1st (Physical).

The Blu-ray, DVD, Digital, and 4K Ultra HD release arrives filled with bonus materials for the whole family including a special short, alternate and extended scenes, gag reels and Easter Eggs! Additional special features include Teachers’ Travel Tips with Mr. Harrington and Mr. Dell and interviews with the cast and crew focused on stunts and location in The Jump Off and  Far, FAR, From Home. Explore how Spider-Man was introduced in the MCU in Stepping Up and get a closer look at the special chemistry between Jon Watts and Tom Holland in It Takes Two. Fans will want to dive into The Ginter-Riva Effect, Thank You, Mrs. Parker and Now You See Me features for more character focused details. The 4K Ultra HD also features Dolby Vision and Dolby Atmos audio.

SPIDER-MAN: FAR FROM HOME has a run time of approximately 129 minutes and is rated PG-13 for sci-fi action violence, some language and brief suggestive comments. 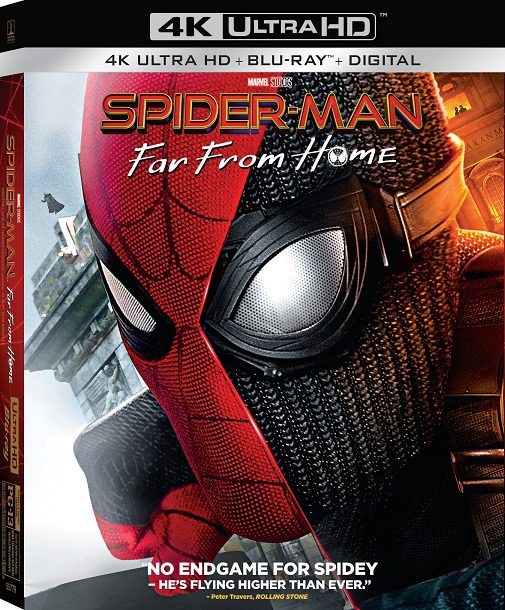