Spider-Man: Into The Spider-Verse Review

Spider-Man: Into the Spider-verse (2018)
Sony Pictures

Phil Lord and Christopher Miller, the creative minds behind The Lego Movie and 21 Jump Street, bring their unique talents to a fresh vision of a different Spider-Man Universe, with a groundbreaking visual style that’s the first of its kind. Spider-Man™: Into the Spider-Verse introduces Brooklyn teen Miles Morales, and the limitless possibilities of the Spider-Verse, where more than one can wear the mask.

SPIDER-MAN: INTO THE SPIDER-VERSE Trailer:

Let’s start off by talking about the animation in this movie. It’s a pretty slick 3D-like style that almost has the motion of old school claymation. Despite not being the most traditional style of animation many people may be accustomed to, it definitely works exceptionally well for the movie. This animation helps accentuate different aspects to the movie from a visual standpoint. More specifically, the film flows in and out of different kinds of animation styles but in a very subtle way. What I appreciated the most was how at different times the film would just turn into a motion comic book. Adding the literal comic book elements really helps to add that unique touch that comic book readers are very familiar with.

As a matter of fact, the animation serves to be more of a practical medium for this film to deliver some heavy concepts and themes. If this weren’t an animated film, it would be really hard to imagine some of the sci-fi elements working in a live action setting. So rather than having to watch live actors in a movie full of crazy CGI effects, it becomes a lot easier for the audiences to buy into more of the psychedelic visual effects in this film. 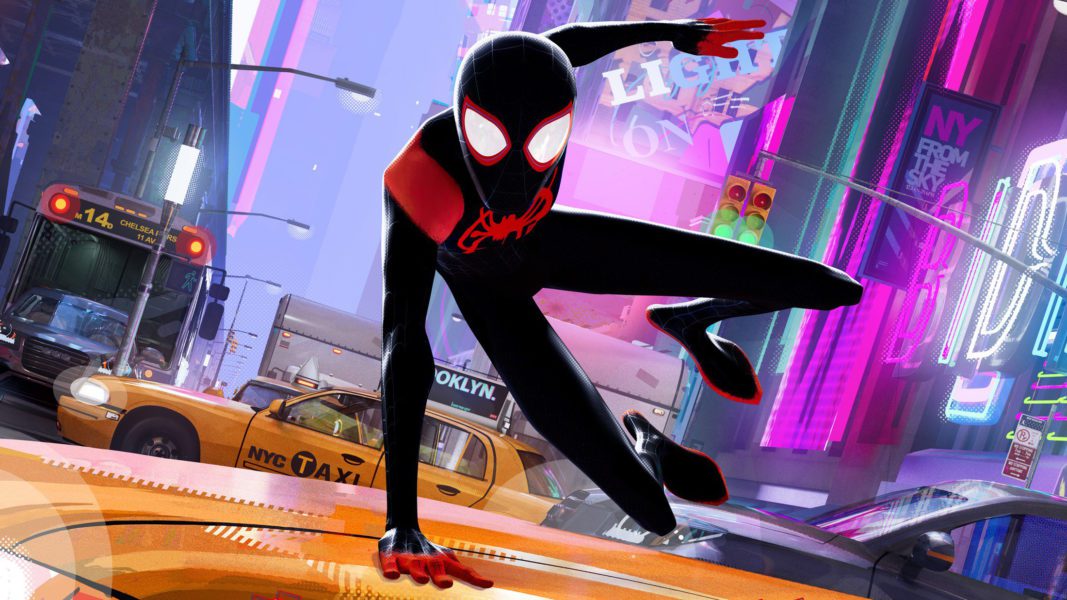 One of my biggest concerns going into this movie was that I didn’t know if this movie would truly be about Miles Morales or not; Luckily it was. As you could probably see in the trailer, there are a number of other characters in the film. While I would’ve preferred more screen time for Miles, the timeshare wasn’t that bad. While they each have their own fun and unique moments to shine, none of them truly steal the spotlight away from Miles’ character. You’ll enjoy the way Miles learns about his powers and discovers what it truly takes to become a hero.

Another surprising win for this movie was the exciting action sequences that it displayed. If you happened to see the post credit scene in “Venom“, then you’ll already know what I’m referring to. If you haven’t, then just be ready to fasten your eyeballs’ seat belts, because the incredibly fast paced chase scenes will definitely take you for a ride. They were so good that you’ll feel the intensity and suspense build up in some really thrilling moments in the film.

As for drama, this movie does have its fair share of the feels too. It was great to see how this Spider-Man film was able to tap into the core elements that make the Spider-Man character so rich and deep. Even if you happen to know the outcome of certain situations for some characters, it won’t matter. It doesn’t take much to feel the pain, loss, and other emotional challenges the characters endure.

Thankfully this movie isn’t a total downer. That’s because it is so incredibly funny. I suppose that’s is to be expected given the fact that Lord and Miller (“22 Jump Street” and “The Lego Movie”) had a hand in making this film. If you’re a fan of the past Spider-Man movies, then get ready to laugh your butt off as this film pokes fun at the Spider-Man movie franchise, and drops a number of funny callback references. Don’t laugh too hard though, because you may miss out on some of the jokes. Seriously, even the lyrics to the outro credits are pretty funny.

The soundtrack throughout the movie is simply perfect.  The music transitions seamlessly at different moments to amplify the setting or mood during scenes. Better yet, every song sounds like something that Miles Morales would listen to. As a result, both the music and the main character become a bit more relatable.

Besides having the comedy, drama and action, the overall cast is definitely the backbone for this film. Shameik Moore was perfectly cast as Miles Morales and Jake Johnson was an ideal fit for the version of Peter Parker that he portrays. I think the potential fan favorites, that literally got me to laugh out loud, will come  from Nicolas Cage and John Mulaney’s Spider-Man characters.

The only issue that came to mind actually stemmed from the same animation that I praised earlier. While it is vibrant and colorful, there’s a bit of blurriness that occurs throughout the movie. The best way to describe it would be like if you had ever walked into a 3D movie, and forgot to put on your 3D glasses. I think this blurriness was done intentionally since it does maintain the main character on screen to be in full focus. Either way, it was just a bit  distracting at times.

Spider-Man: Into the Spider-Verse is hands down the best Spider-man movie we have to date. I heard people mention that before going into my screening, and in my mind I was like “No way this could top Spider-Man 2”. However, I think it did. Spider-Man: Inter the Spider-Verse just does so many things well that it’s incredibly hard to deny it’s awesomeness. If you were halfway hesitant on seeing this just because it’s animated, worry not! The content is definitely suited more so for teens to adults.

I’m so happy that this movie represented Miles Morales in an authentic and positive way. I think this film helped his character live up to be the positive, diverse representation that he was created to be. This movie has everything a Spider-Man movie should have, and it will only leave you wanting to see more. I suppose Sony knew that going in because even before the movie’s release, they already greenlit the sequel. (Which at this point I cannot wait to see!)

So if you’re a Spider-Man fan, comic book reader, or just interested in seeing a great coming of age story for a hero, then Spider-Man: Into the Spider-Verse is definitely the movie you’ll want to see. This is nothing short of a must-watch in theaters. Also, be sure to stay until the very end for a hilarious post-credit scene.

miles morales spider-Man Spider-Man: into the spiderverse
Add your voice!Join the conversation on Discord...
Join Our Discord