Prepare yourself Splatoon fans, a special Nintendo Direct focused entirely on Splatoon 2 is coming your way!

On Thursday, July 6th, Nintendo will be conducting the newest entry in their informational series focusing on the sequel to one of their most popular titles in recent years. Splatoon 2 is absolutely one of the most anticipated titles for the Nintendo Switch and fans around the world are clamoring for any new information they can get. Previous Nintendo Directs have given snippets of information, including new game modes, weapons, and the intriguing Salmon Run. The introduction of this enemy swarming battle mode will fit perfectly with the additional processing power of the Switch, adding a fun event for players on the go. Take a look at the trailer below.

Nintendo’s multiplayer third-person shooter was the highlight of the WiiU and its transition to the multiplayer friendly Switch is proving to be flawless. Earlier this year we were treated to the Nintendo Treehouse exclusive “Splatoon 2 Global Testfire” that acted as a test for their servers and opened up a short window of play sessions that featured two maps and four weapon sets. Announcements of a local multiplayer mode will also add value as the Switch offers a great opportunity for party play. In between releases we also got snippets of the story which finds the Squid Sisters being separated and the Great Zapfish being stolen yet again. 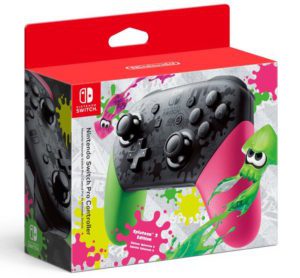 Check out the Splatoon 2 Nintendo Direct coming July 6th at 7 a.m. PST and be sure to get your hands on Splatoon 2 when it launches on July 21st alongside a Splatoon 2 themed Switch Pro Controller (seen above).

Are you excited for Splatoon 2? What new feature are you most looking forward to? Comment below and stay tuned to GWW for more Nintendo news.