I decided instead of writing a limited and haphazard spoiler-free review of Alien: Covenant, I’d focus more on where the state of the franchise is after this released and what the future holds for Ridley Scott’s potential sequels.

BE WARNED IF YOU HAVE NOT SEEN ALIEN: COVENANT THERE ARE SPOILERS GALORE IN THIS ARTICLE!

We’ve known for a while now that Prometheus 2 was expected to set up a fleet of sequels and I think knowing that hurt the enjoyment of the film slightly, as we know that this will lead to more stories.

Not to mention, that a bulk of the kills were spoiled for audiences in the marketing of the film, even the twist of David killing the engineers via the Paradise clip. Marketing ruined almost all of the film’s twists when Fox went out of their way to crush plot leaks and set photos from making the rounds, their marketing team turns around and spoils a majority of the film.

Now, I think it’s safe to say that Covenant was truly meant as a launching pad for those sequels Ridley Scott has been talking about for over a year. It was also a means to an end, that being reintroducing the xenomorph back into the fold while trying to tie up various loose ends from Prometheus.

My biggest issue with the film there’s almost zero time to get to know this crew or even their names, they all sort of blend into together. The first two movies were able to convey the character dynamics in a short amount of time, but Ridley seemingly has zero time for that and has to rush things.

Explaining what the black goo actually happens, however, it would have been more interesting to have them get more explanation from the Engineers before David killed them all in a massive act of genocide.

There’s also a hint of producers/Fox trying to get a slasher/Aliens tone, for whatever reason Scott caved on those fronts. The kills while gory didn’t entirely feel organic to what we’ve seen in previous incarnations, in fact, some felt more like what you’d expect in a lesser knockoff film. As they were a matter of fact to get some blood in the film, rather than becoming hauntingly visual as previous films have treated the kills.

Daniels (knowing Walters is really David) and Tennessee are alive in cryosleep but with the obligatory way, characters are killed off in this film I half expect another off-screen death.

As much as I think people are expecting that Ridley will eventually remake Alien, I think he’s already done this here and it’s some form of retconning the franchise. This way, they don’t have to be beholding to the canon and deviate as the screenwriters wish to go.

I also get the impression the sequel Alien: Awakening will be more in the way of Aliens’ Hadley’s Hope than most are expecting.

The problem is that audiences and fans are now expected to follow and support a lead character that is butchering cohorts and committing genocide. The button at the end of the film suggests that he’s likely going to do it again with the Covenant’s 2,000 colonists.

I did like a couple of things here, which included the viral aspect taken from the William Gibson script for Alien 3. I think the brief Engineer stuff looked great and had me wishing we had more of that. The Covenant ship design was also great.

In the end, I liked the film but not as much as did with the original viewing of Prometheus. I assume it will take a few more viewings to warm up to it but I can totally see why many took issue with the creative choices of the film.

Ridley spends way too much time attempting to establish future films rather than focus on the one at hand which is way more apparent here than in it was with Prometheus. 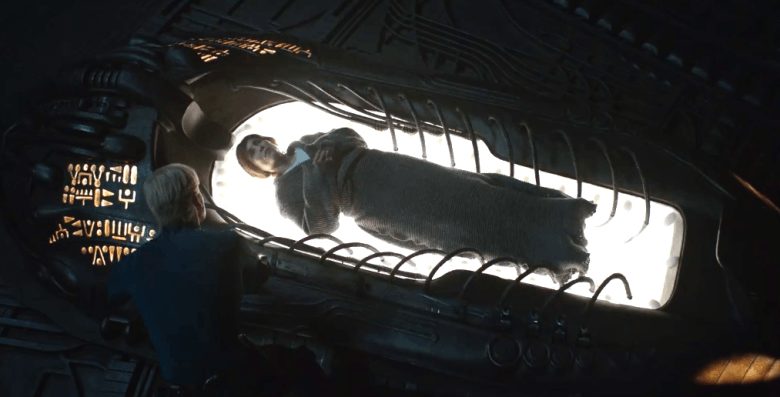 From what I understand, we were expected to see more of the Shaw/David scenes but for whatever reason, that was nixed. Even though, Scott has hinted that Alien: Awakening will be set between Prometheus and Alien: Covenant, that seemed like a misdirection on his part as I doubt we’ll be traveling backward here.

However, there’s zero denying that this franchise is now in the hands of Michael Fassbender who has essentially taken the Alien saga throne from Sigourney Weaver. Ridley Scott has made it clear this is David’s story and I suspect he’ll continue to be constant in these films.

Awakening (referring to colonists?) according to Scott and our production sources is set to begin filming next summer, if 20th Century Fox makes enough money from the film that’ll likely move forward as planned.

I get the idea that this whole franchise is now taking a science fiction edge to religious fiction (Prometheus, Cain and Able, Paradise Lost, The Last Supper), but I think you can only push the general audience only so far with these buttons before they become comical. David 8, as I suspected is indeed a Lucifer allegory and wished things weren’t as predictable here. Take cues from the religious literature but try to be less heavy handed with it.

A big fan theory is that the robots in the Alien universe are compelled to pursue the xenomorph to create the perfect indestructible body. It’s possible that David somehow is able to compel other androids scattered across the universe to seek out a missing ship, possibly by way of MUTHER (via his executive Weyland codes gaining him complete control of the ship) on Covenant sending out code back to Weyland headquarters. Only the ones with specific life-protecting protocols are immune to the directives, as seen with Walter and Bishop.

Another suggestion is that David is the Space Jockey in the original Alien. Perhaps, creating the perfect bio-mechanical body only for it to backfire on him or someone who survives his experiments kills him before he’s able to get his ship of xenomorph eggs to Earth. The towering size of the Space Jockey compared to the size of the Engineers could be explained by David taking his name from Michaelangelo’s David. It’s possible when creating his own perfect form he’s keen on a size similar to the statue.

What did you think of Alien: Covenant and what you want to see happen in the future?Sound off below in the comments!