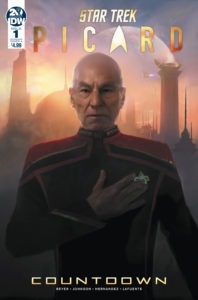 We are just a couple of short months before the premise of Star Trek Picard on CBS All Access in the States and Netflix elsewhere. IDW Publishing has just released a new three-issue series reflecting on the time preceding the start of the new show this week in the form of Countdown #1. Before he spends his time with his new Number One and his vineyard, we get a glimpse of what Jean-Luc was up to and what caused him to resign the commission.

The first images we see have some very suspect characters with pointy ears which then segues into a glimpse of the recent past with some familiar faces as well as some very headstrong new faces. We see images of places both near and far that revolve around an event that we haven’t seen in the Prime Universe yet but is very well known to the Kelvin Universe. The end of the issue gets intriguing as well as a gentle cliffhanger.

I was highly impressed with the writing and artwork in this issue. The look and feel of the characters and uniforms worn were bright and strong. The story felt like something out of a TNG episode if the series never ended. The new characters were enjoyable and hopefully not just one-shot entries into the Star Trek Universe. If you are a fan of Next Generation and look forward to Picard, pick this up immediately.