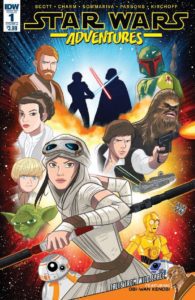 Star Wars Adventures is an all-ages anthology comic book by IDW. I’m not sure if any of this is canon, but it’s meant to have fun with.

Better the Devil you Know

Before the events of “The Force Awakens,” Rey had to deal with the kidnapping of the Unkar Plutt. This was a neat little story that showed Rey’s living conditions and compassion. She really likes to collect things: first the star fighter helmet, and then the droid head. I’m not sure WHY she’d keep a random droids head, but I believe it. I feel like there’s more to Rey and Unkar’s relationship than we’ve been lead to believe. I wonder if the next part will touch on that. They don’t seem to like each other, and he always screws her over on portions, but a flashback in the movie showed Rey being left with him. Someone had to have raised Rey right? She doesn’t seem to care all that much about getting him back, but she has to. 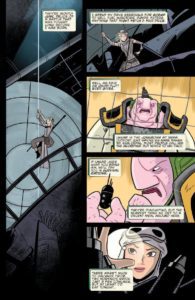 I really love the concept of the Tales from Wild Space story. It looks like it’s going to focus on a man named Emil Graf who tells old tales that have been passed down to him. It’s a really great idea because there are always rumors or legends in the Star Wars universe, but we never get to see them being passed on. In “Stop, Thief” Obi-Wan uses his wit to track down a thief that has been plaguing Dex’s Diner. It’s not very long but I’m already on board with this anthology.

I wasn’t expecting much from it considering it’s an all-ages comic book, but I really enjoyed Star Wars Adventures. It’s a great way to go back explore classic and new Star Wars characters. I enjoyed the art in both stories for what it was. They’re clearly going for a more cartoonish look, which is fine. I’m definitely giving the next issue another read.