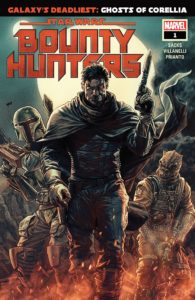 Star Wars is steeped in its rich history. Some of the most exciting characters in the universe are those that we really haven’t seen an awful lot of, the Bounty Hunters. They’ve shown up in certain other parts of the lore but now they’ve made their showy entrance in this week’s comic entry. The subtitle, Galaxy’s Deadliest: Ghosts of Corellia, look to bring a richer story than expected.

A team job on the planet Corellia brings together several old favorites like Bossk and Boba Fett along with a few new characters come up against a large bounty. Like any good team mission, a little unexpected surprise happens in the middle of it. Fast forward several years to after the time of The Empire Strikes Back and those same bounty hunters get brought back into the hunt for this fugitive. What happens next is to be seen.

The dialog was done very well and definitely had some interesting interactions between the various Hunters. The artwork was spectacular it was definitely a sight to see, especially when it came to the action portions. Personally some of the action frames made the dialog a little confusing however overall it was solid. If the Bounty Hunters have a special place in your fandom pick up this title.