It took over three months for the Walt Disney World version of Star Wars land to open and boy was it a weird opening weekend. I went on August 31st. Two days after the official grand opening due to the chaotic mess Florida was in because of Hurricane Dorian. Like any true fan I went early to see how rope drop is handled and found that it is indeed worth it. 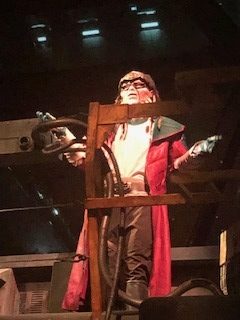 You are escorted to the Black Spire Outpost by First Order Stormtroopers. I do not know if this is going to be temporary, but I hope it stays because it is essential in immersing you into the theme of the land. The only downside to this is you have the mob mentality, with people trying to rush and cut in front by any means necessary. There was a lot of pushing and shoving to get ahead of everyone. The other downside is people recording the entire experience on their cell phones, which ruins the authenticity of the moment and annoyingly slows down the line. 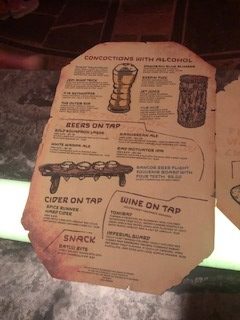 After walking through the tunnel into Galaxy’s Edge, you are transported to a fanboy’s dream. You can get pictures of an X-Wing, an A-wing, different speeders, droids, First Order transporter and finally the Millennium Falcon. All of it is absolutely incredible, as it feels like you have been transported straight into the movies. The amount of detail in each prop and item shows how much Disney took every detail and changed it to fit the theme.

You see all of this while being escorted to the main attraction, Smugglers’ Run. The queue for this attraction is worth the wait. You see all sorts of easter eggs from all the Star Wars franchises. When you get to the staging area, they split you up into multiple different chambers.

The first chamber splits up the line into two different sections. This part has a few things to look at like the diagram of the falcon. After this you go into a different room and see Hondo Ohnaka, who walks around and provides instructions on the raid that you will be taking part in. At the last minute we are informed the ship will be the Millennium Falcon. We are then brought into a separate section and essentially, you are boarding the Falcon itself.

In the Falcon you are given one of three duties: pilot, gunner and engineer. I highly recommend being a pilot, as you are able to fully enjoy the ride experience. Once inside the cockpit you are given a small tutorial on the role you are assigned. Failure in doing your task affects the overall raid. It is worth noting that the better your crew performs, the longer the experience.

Smuggler’s Run is the main attraction at this point but for people who are not interested in such a ride, there is still the land itself to explore. The overall feel is immersive and helps maintain the feeling of being in the Black Spire. There are 3 experiences a guest can sign up for: build a droid, build a light-saber, or Oga’s Cantina. As I didn’t make a reservation for any of them, I was able to do walk in for the Cantina.

In Oga’s Cantina, you are in an intergalactic bar with DJ Rex as your host. The drinks are theme park priced, as the specialty drinks with the souvenir items are very expensive. One of them is a beer flight with a Rancor Board for $85. The benefit is that you get to keep the board. But the range of drink options was incredible and the amount of alcoholic and non-alcoholic drinks is a great way to stay out of the Florida heat.

The only theme park experience that was this well thought out was the Wizarding World of Harry Potter. Both had the incredible task of having you feel like being transported into a new world. Something to think about is that Galaxy’s Edge is still missing one of their key attractions that will open up later this year. When it does, I believe it will be a game-changer for the years to come.

Something that was different from Disneyland’s version was that they didn’t have a lot of loose things that can be taken. In Disneyland, if it wasn’t bolted down, guests stealing items and selling it on eBay. Disney World made sure that common items were not themed to the land which prevented people from stealing the trays, sporks, and cups.

Overall Galaxy’s Edge is a fanboy’s dream come true. The world they created is enjoyable for all aspects of the Star Wars fandom. For the hardcore fans to those that are just starting out. There is something for everyone and it is a great jolt of life into Hollywood Studios. When the Rise of the Resistance attraction opens, then the land will become the gold standard of transforming a property into a theme park experience.