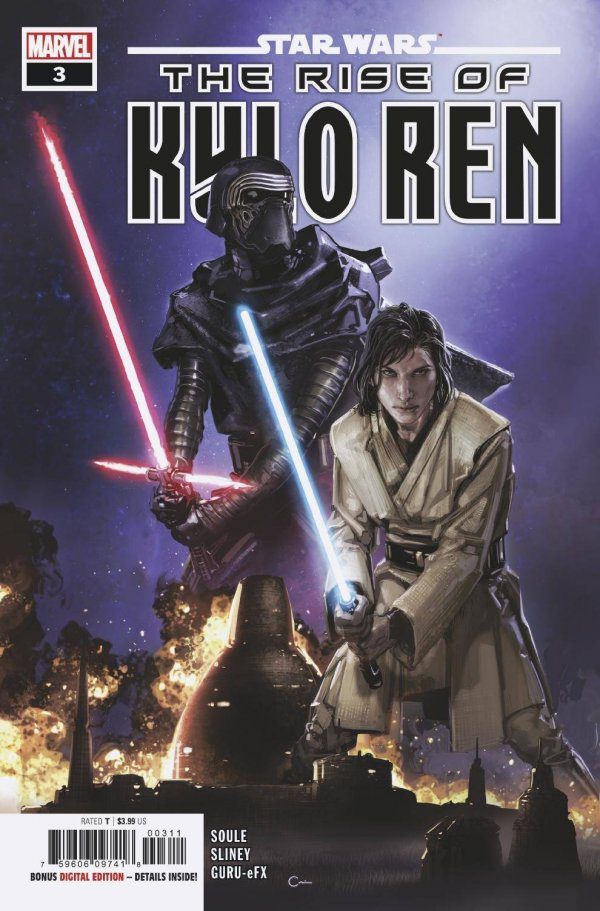 In the continuation of Ben Solo’s origin story, we get to finally see how Ben became Kylo Ren. As fans of his, his story is important as we didn’t know the origin of the Knights of Ren or how he became part of that group. The previous two issues built that foundation, in this issue we see Ben start his transformation to Kylo.

So far, this series has had the difficult task of creating Ben/Kylo’s back story and has hit on all of those marks. Similar to the other Star Wars comics, it gives important information to help the audience understand what lead to the movies. To date, all the comics have been well received and this one is no different.

Soule has been writing for the Star Wars books for a while and has not relied on giving into fan service. It’s important that Ben’s fall to become Kylo takes it time and is not rushed. Since this issue focuses on how he joins the Knights of Ren, he couldn’t skip a beat. One theme from the movies that Soule kept is Ben’s reluctance to join the dark side or the shadow as it’s called by Ren. This theme has played an important part in Ben’s story and seeing it in the comics, shows the dedication to keep it consistent with the movies.

Sinly art has a clunky grace to it. When it comes to original characters, there is a smoothness that flows, but when it’s an established character, that become a different story. Ben’s style has to be almost lifelike and his style struggles to match it. It isn’t a knock as the action and the set-up panels still have the details you want. It’s the downside of drawing established characters but luckily most of the characters are original creations.

Issue 3 matches the strong story that Soule and Sinly have set out to create. The words and art blend perfectly and the story does not feel out of place or rushed. The only criticism I have, is that I wish this comic came out before Rise of Skywalker. It helps build on why Ben became Kylo and gives the audience that connection that was missing from the movies.