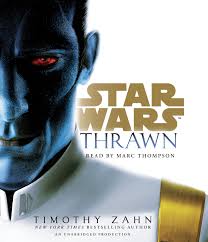 Thank the Maker! A Star Wars Legend has returned to the new canon. And Grand Admiral Thrawn is back too. Timothy Zahn was the author of the renowned Thrawn Trilogy in the 90’s. His trilogy ignited the Star Wars Expanded Universe as we knew it and saw me through many an awkward session in recess after not being picked for a sports team.

Before the book, Thrawn already returned to the canon on Star Wars Rebels this past season as a Grand Admiral intent on destroying the heroes of the Disney XD cult favorite show. This novel takes place prior to those animated adventures to explore the origins of the Napoleon of the Chiss Ascendancy and return Thrawn to the printed page.

The pacing and structure of the work felt like a season of a television show as well. After gaining a commission in the Imperial navy, Thrawn moved from system to system and racked up promotions while he acted as the Sherlock Holmes of the Star Wars galaxy. His faithful attendant, Eli Vanto, played the part of his witless Watson and made me wonder why Gilad Pellaeon of the original Thrawn trilogy was not revived from Legends to act as Thrawn’s aid.

Military-minded readers will love the intimate glimpse Zahn delivered into the political hierarchy of the Imperial military. Above all, the Empire was depicted less of a force for pure evil. Viewers and readers are used to seeing the regime send endless waves of Stormtroopers and triangle ships to destroy helpless planets. Zahn reminded us that the Empire took on the bad guys in the galaxy as well. Thrawn regularly defeated smugglers, pirates, robbers, and kept casualties to a minimum while generally leaving every planet he was assigned to with a better quality of life than when he arrived.

The Empire is described as being “multifaceted” and Zahn revealed it was far from united internally. It was all about “who you know” in the Imperial political machinations of promotion and many solid Imperial officers were sold down the river by less capable yet more connected counterparts. This felt strangely similar to the prequel era Republic and the corruption of the Senators that ultimately led to its downfall. The Empire suffered the same symptoms of cronyism with the marked difference that no one dared challenge or question the Emperor. 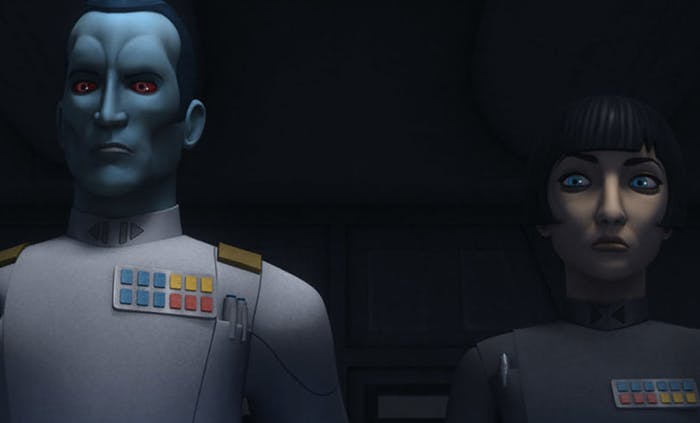 For success in the Empire, a being much be born with three key traits: human species, connected family, and coordinates in the Core on their birth certificate. The Core systems are treated like the Blue Blood royalty of the Empire and afforded opportunities that those who grew up in the Outer Rim could never imagine. There are serious levels of envy, mistrust, and outright revulsion when a being from the wrong side of the space lanes finds success in the Empire. Citizens born further out, in Wild Space, are considered toothless yokels fit for testing the proficiency of Vader’s lightsaber on Stormtrooper armor. Thrawn’s chief advisor, Vanto, was one of the Imperial cadets who hailed from Wild Space and he never once imagined a career outside of Imperial supply before meeting Thrawn.

Thrawn was an alien hailing from the Unknown Regions. He existed as the perfect anomaly to the Imperial system with his rapid rise through the ranks. Palpatine immediately took a liking after meeting Thrawn and believing that grave threats lurked in his unexplored home systems which Thrawn may prepare the Empire to one day encounter. Despite his brief cameos, it was interesting to gain an insight into Palpatine’s personal fears as ruler of the galaxy after the Jedi were gone.

The hook of the entire novel also came early when Thrawn name-dropped a certain Jedi, Anakin Skywalker, in his meeting with the Emperor. Palpatine immediately had Thrawn promoted through the ranks, which made him a target for many in the Empire who did not support non-Core citizens with blue skin to serve in the mightiest navy in the cosmos.

While the social stigmas and prejudices of the Star Wars galaxy were fascinating for me to learn, the book was not a complete home run like the Thrawn Trilogy. There was a serious lack of any credible adversaries for Thrawn. The brilliant commander solved all of his problems with ease and then left the reader to wait for long expositions of how he solved a particular crisis. I don’t think the Chiss ever sweated any of his antagonists, including the book’s primary villain “Nightswan”. Coming from the same galaxy with iconic villains such as Darth Vader, Boba Fett, and Maul, I have to wonder how Zahn came up with a name as lame as “Nightswan” as the Moriarty to Thrawn’s Holmes. Thrawn’s entire character is based around being the Sun Tzu of the Empire, yet I was left feeling empty with the lack of credible challenges that came his way.

I was also uninterested and tended to zone out during the book’s lengthy sections that followed Arihnda Pryce and her rise into the Imperial political system on Coruscant. I would venture to say that no one who picked up a book about Thrawn wanted to read about a third-tier villain from Rebels getting hired to work in job placement on Coruscant or struggling to regain her family’s mining facility. The metallurgist Star Wars fans may have enjoyed the frequent discussions about mining doonium and its rising demand in the galaxy, but it became tedious to wade through the book’s need to beat me over the head with the message that the Empire really wanted this important metal. 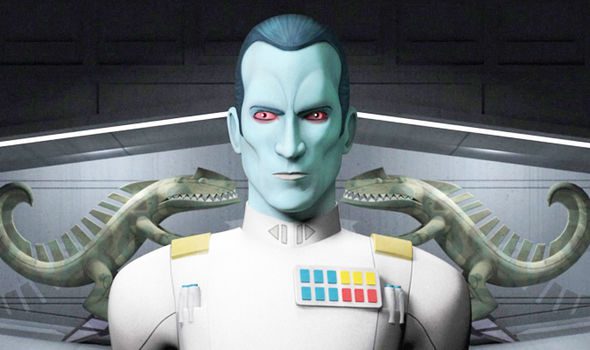 And, sadly, the payoff for the tedious accounts of the alloy was that the material was required for the Death Star. If I may speak on behalf of Star Wars fans, we are tired of hearing about the prolonged construction of the Death Star. Rogue One was brilliant and told me all I needed to know about a project that took twenty years to complete in a galaxy as advanced as Star Wars. Far more tragic was the lack of further insight into Thrawn’s adventure with Anakin Skywalker during the Clone Wars. The big hook, in the beginning, felt like a form of literary click-bait. I can only assume that story will be told later, but as I read about Thrawn chasing Nightswan and Pryce turning down a job as a waitress on Coruscant, I couldn’t help but wonder why they didn’t just begin with a Skywalker/Thrawn novel.

All in all, I believe the adventures of Grand Admiral Thrawn will continue in literary form as well as on Rebels this next season. Soon the creators will have to find solid reasons for him not to appear in the Original Trilogy. I suspect Thrawn returns to the Unknown Regions shortly after the Death Star is completed on a long term mission to seek out new life and go where no Imperial has ever gone before into uncharted space. If Palpatine and the Aftermath Trilogy can be believed, a darker threat lurks in wait for the heroes possibly in the sequel era.

Jay Sandlin is an author, historian, and podcaster right here on TheGww. Find his podcast #WhoWouldWin? and join the debate show for the ages! https://thegww.com/category/podcasts/whowouldwin/