Stopping A Warhead in Aquaman #18 REVIEW 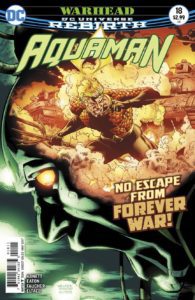 Aquaman #18 is the conclusion of the Warhead storyline. It confirms, that the destruction that was shown in the final pages of issue 17 have been hallucinations induced by Warhead. We also learned he is a hybrid creation by the Chinese Government to perform certain military operations. Through this confrontation, Aquaman discovers that Warhead was not necessarily a threat, but instead he was crying out for help. He explains to Aquaman that he was used by the Khandaqi army as a weapon to destroy the Bialyans. Once the victory was achieved, the Bialyans surrendered, but the Khandaqi army ordered Warhead to continue persecution in eliminating them all. Warhead realized that there was no “strategic value” and refused to comply with the order.

Due to Warhead disobeying direct orders, the Khandaqi’s brought him back and attempted to decommission him, but instead they only damaged him. Warhead 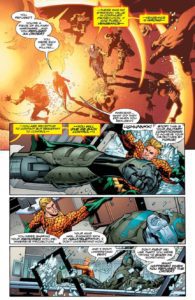 explains that he fled to other secured locations to repair himself, but woke up from stasis once Black Manta in issue 14 used the N.E.M.O suicide trigger. Of course they are discussing this while dishing haymakers at each other. Throughout this exchange Aquaman offers a helping hand, but then realizes that in doing so Warhead is seeking to control Atlantis.

At first, Warhead sees that using Atlantean technology as an advantage, but Aquaman was able to convince Warhead to evaluate who is the true threat in this scenario. Lo and behold Warhead discovers he is the threat. After this discovery, Warhead drops his technopathic ability and accepts Aquaman’s offer to heal in Atlantis. While Warhead is healing in Atlantis, Aquaman heads to Amnesty Bay to meet with Mera but he is surprised by an unwanted individual.

Aquaman #18 a good issue in which Dan Abnett showcases Arthur’s compassion while attempting to send the message that violence isn’t the answer in all situations. Scot Eaton’s art is very detailed and is quite comparable to Brad Walker in terms of style. The colors in this issue is the highlight when showcasing the visions between Warhead and Aquaman.

This final issue had some great characterization in showing Aquaman as compassionate. As well as throwing in some further plots that will surely make an impact soon.