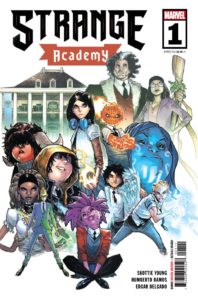 The magical, mystical world of Marvel has been on the rise for the last few years and now heroes of the mystic arts are cultivating a new generation of magic wielders. Strange Academy is a solid start to a team book that feels familiar and yet unique. Unlike many teen teams of the past three decades (The New Warriors, Young Avengers, & Champions), this series brings together characters from across planets, realms, and dimensions. This additional “fish out of water” setting provides a wonderful foundation for telling stories of youth, self discovery, doubt, rebellion, and acceptance.

Writer Skottie Young starts to introduce some of those concepts in this first issue as characters from Asgard and Hell clash and the character from Weridworld is confident and comfortable in its’ own unique skin. Young’s magical school does not rest on character archetypes, there is no preassigned leader, rebel, love interest, or clown. To Young’s credit, each character is treated with individuality and provided a few panels to develop. The value of this in a teen team title cannot be understated. Providing strong characters with doubts and questions creates a book full of students where any reader can find someone to identify with.

Young’s work on teen teams and magical realms stretches back over 15 years. He drew for the reboot of New Warriors in the mid 2000’s and then went on to adapt the Wonderful Wizard of Oz series. His comfort with young characters and his imagination with magical applications creates a whimsical feel early in the book that carries through to Dr. Strange’s welcome speech on the final page as Strange invites students to 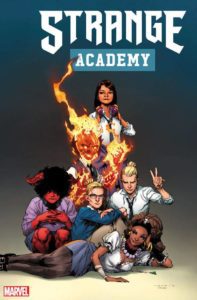 Humberto Ramos signature style works well for the book. He ability to draw teens who look young grounds the youthful setting. Ramos’ facial features frequently contain few features and lines which works well for the young cast of the series. He does deliberately use definition on the adult faces to provide the distinction of age. Edgar Delgado’s colors are bright and varied, but the slightly washed look creates a storybook appeal that fits nicely with the magical school setting. Clayton Cowles letters deserve a nod as they depict the variety of characters, tones, and realms of the cast. The fairy’s speech is different than human, the Asgardian speech contains Thor’s traditional Norse characters, and the demonic characters words flame and drip to great affect. It is these small artistic touches throughout the issue that construct a sense of place and inclusivity to the diverse cast.

Strange Academy transcends it’s well worn fictional setting of a magical school and provides a new and unique perspective on magic in the Marvel universe. Young and the artistic team are off to a solid start in this book that young and old will enjoy.

Marvel Comics strange academy
Are you an Insider?News, reviews, & updates are just the beginning.