Stranger Things: Into The Fire #1 (REVIEW) 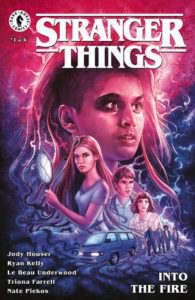 I’m sure a good portion of us have viewed the Netflix hit, “Stranger Things” by now. Or you’re like me, who only watched the first season and is drastically behind on the program. This comic has an interesting take on the Stranger Things universe, focusing on the other test subjects, where the show focuses on Eleven.

I enjoyed the fact I became introduced to new characters who have been exposed to the experiments at the Hawkins Lab, and their stories attached to them. Two escaped subjects, Marcy and Ricky, have been on the road to discover certain deaths attached to Hawkins Lab, and trying to track down other subjects. They eventually track one down, only to discover, Marcy’s missing sister (one of the subjects) isn’t missing at all.

There is one direct connection to the Stranger Things television program which is the appearance of Kali, AKA, Eight, who played a rather big role in Stranger Things 2 (and her introductory illustrations are the most gorgeous two panels throughout the entire comic!).

The art is interesting. The characters appear older than they are, but it’s something I could easily gloss over. It’s decently simplified illustrations throughout the comic, and the colors help to convey the emotions in each scene.

I wasn’t overly WOWED by the comic, but it’s something I can definitely find myself collecting issues of, and reading casually with a cup of coffee (because I always have a cup on hand).