“Tis but a scratch!” Is a far funnier reaction for Monty Python and the Holy Grail’s Black Knight than writhing around on the floor in agony as his realistic wound gushes blood. Stuber, unfortunately, doesn’t realize that. It neither fully commits to going over-the-top with its violence, nor does it want to avoid moments of sentimentality to connect with the characters. What we are left with, then, is a bizarre mishmash of action comedy paired with graphically real violence.

To be sure, elements of Stuber work. Kumail Nanjiani and Dave Bautista have genuine chemistry as a hapless Uber driver and a trigger happy (and legally blind) police officer who commandeers his fair. Bautista has a hilarious bit where he attempts to drive his car post-LASIK surgery and winds up crashing it in a ditch. And when Nanjiani airbrushes out a male stripper’s “Hillary 45” tattoo, it’s both funny and oddly sweet.

Moments like this are tainted by the tone the movie otherwise strikes. The opening scene is a realistic, visceral gunfight that ends with the death of Bautista’s partner. Our next scene switches to Nanjiani leaving his day-job and beginning his Uber night job, complete with antics involving his dickish boss. Jarring mood shifts like this are common and undermine the sturdy premise at the film’s heart. 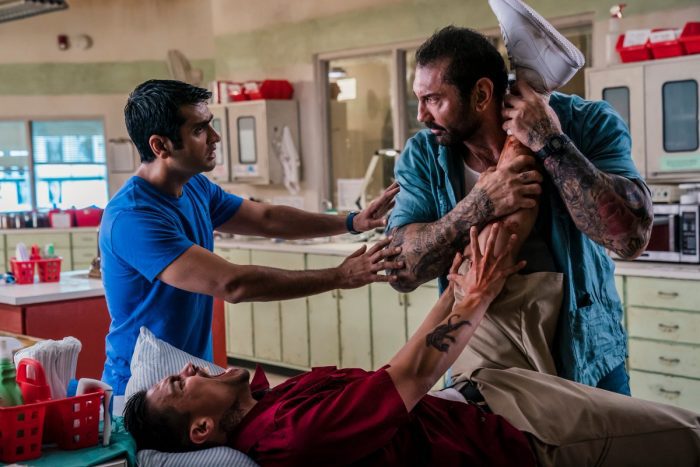 That premise is certainly supported by Bautista and Nanjiani, whose aforementioned chemistry shines through at points. But it’s when they have their cathartic fight in the store where Nanjiani works that the film’s tonal issues become clear. Initially, the fight is creatively staged and funny, with both men grabbing whatever objects they can around them to use as weapons. Baseball bats, hockey sticks, a tricycle, all of the objects in the store are used to their full potential. Including a box of fish hooks. Watching Dave Bautista slowly pull each hook out of his face (leaving bloody wounds behind in the process) does not make for the comedy gold this scene intends. Neither does a later scene showing a propane tank smashing into a bad guy’s face.

And therein lies the problem of Stuber: there is nothing in this film to suggest if it would rather lean more into the action or the comedy of its action-comedy premise. For every off-color joke, there is a scene of realistic violence or the sound effect of a bone breaking. And for every broken bone, the movie responds with another joke. It feels as if its too insecure to lean on either, and instead uses both. The result is a jumbled tone of action setpieces and jokes anchored by two actors who both have proven acting chops.

For however talented these actors are, their characters still feel thinly sketched and impersonal. We know that Dave Bautista is married to the job and can’t connect to his daughter while looking to avenge his partner. We know that Kumail Nanjiani has a woman he’s in love with and is supporting her dream of a spin cycling studio in hopes of wooing her. But there is precious little else we know about them to make them feel human. Any action they take in this film feels less in service to themselves or an organic action and instead feels more like the actions of someone directed by a screenplay.

While Stuber has a talented cast and a solid premise, it’s all wasted on the thinness of the story, characters, and tone.