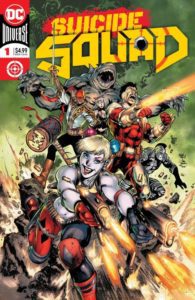 Tom Taylor is going to have too much fun with the Suicide Squad. Obviously, that’s not a bad thing for readers. Especially since Taylor set the proper tone for the title in Suicide Squad #1 — which was the one thing he absolutely had to do.

This isn’t a group that should make readers feel safe. There has to be some level of chaos from start to finish. Maybe along the way they achieve their operatives, too.

Now, it’s tough to maintain such a level of mayhem over a long stretch of time. Like any other story, it’s about the level of uncertainty for what’s to come — in the case of the Suicide Squad, it’s always about whether or not the main and recurring characters will survive by the end of the issue.

DC has been preaching no one will be safe in this new run. They weren’t exaggerating.

And it wasn’t just about the deaths actually happening, Bruno Redondo and Adriano Lucas went all out the artwork. Each one is a bit different, too. They’re not all disgusting — though some absolutely are. But each made an impact.