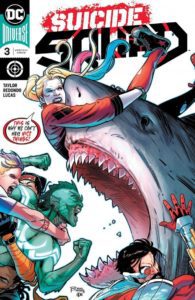 In Suicide Squad #3, Tom Taylor reveals a bit more about Lok’s significance to the plot. But even without that new bit of information, he’s a better fit for the general Suicide Squad story than Amanda Waller right now.

They’re both ruthless, but in different ways. Waller is calculated, Lok is emotional. And that’s why he’s great for the Suicide Squad. This group is infuriating and it seems like Lok has a low level of patience in general. And Suicide Squad #3 shows just how Lok will react.

(WARNING: Spoilers for Suicide Squad #3 ahead.)

When Taylor took over Suicide Squad, he promised anyone can die. He’s shown on multiple occasions that he wasn’t kidding — Suicide Squad #3 being no exception.

Honestly, Shark brought it on himself. He talked a ton of trash. Maybe he would’ve tried to kill Shark anyway, but chirping Fin clearly didn’t help their chances of getting along.

Have you seen this:
Headland (Review)

And, for what it’s worth, Shark’s death very much caught me off guard.

As did the Revolutionaries’ decision to let Deadshot in so quickly. But that was another good call from Taylor. No need to have them battling with one another right now. It’s not a fight we care about. That being said, they don’t need to bring Harley Quinn in just yet. Her being confused would play well.