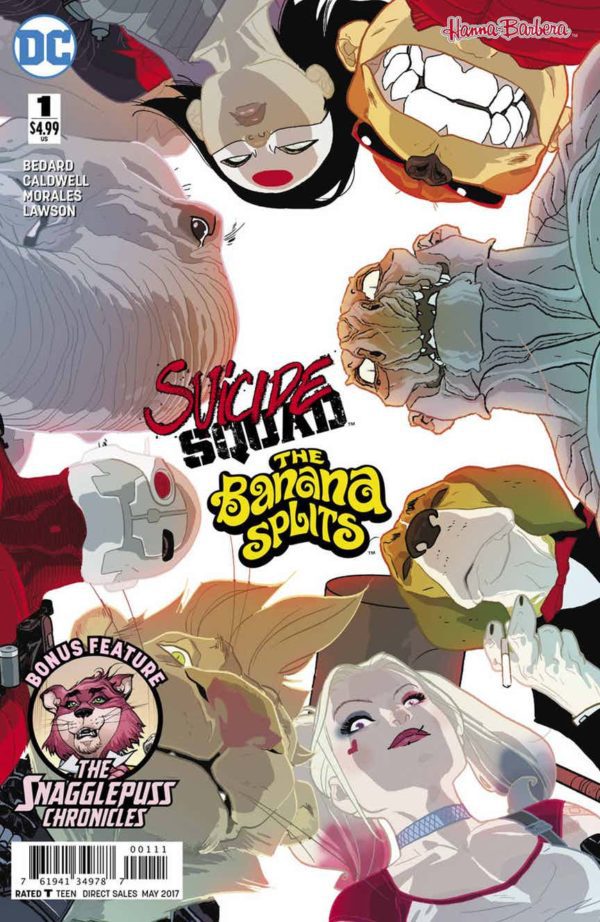 Just when you thought DC couldn’t do any more absurd team-ups, they return with Suicide Squad Banana Splits Special.  Tony Bedard (Supergirl, R.E.B.E.L.S.) and Ben Caldwell (Prez, Convergence) combine their efforts to bring one of DCs most popular and dark properties into the same universe as one of Hanna Barbara’s most childish and forgotten properties. What could go wrong?

Tires rip across the as police cars chase down an outlandish vehicle. Their chase comes to an end as the vehicle pulls over and out

comes Fleegle, a suit clad talking beagle, and his band The Banana Splits. Consisting of Fleegle; Bingo, a gorilla; Drooper, a lion; and Snorky, an elephant they quickly give the audience a recap of their band and greatest hits. The situation quickly escalates into police brutality with the animal musicians and they are viciously tasered and taken into custody.

Meanwhille, Amanda Waller watches as the Suicide Squad fails a mission. She orders that their brain bombs be detonated and requests a new squad.  She contemplates this decision while the cameras behind show the Banana Splits, now in orange jumpsuits, getting into an altercation in the prison cafeteria. This is when things take a somewhat surprising turn; the Banana Splits wreck shop. Bones are breaking and faces are smashed as Bingo yells, “Always some fool dumb enough to pick a fight with a lion, a gorilla and a freakin’ elephant!” Waller sees the massacre and the Banana Splits are quickly geared up and made field ready. Their mission: Save the Suicide Squad. The Banana Splits are dropped into the warzone and quickly meet the Suicide Squad who are busy fighting child androids. They learn that Randall Flagg has been taken captive and it’s up to them to team up and rescue him, Harley Quinn, Katana, Deadshot and Killer Croc grow fond of their animal saviors and they all set out to rescue their leader.

On paper Suicide Squad/Banana Splits Annual #1 seems like an awful idea but as much as it surprises me to say this… Bedard and Caldwell pull it off. The mix of humor and action is well balanced and I found myself laughing as this band of humanoid animals fights criminals and androids. The artwork also finds the balance between gritty and cartoonish, using thick and jagged black lines to outline their colorful characters while maintaining some of the stylish art of the Suicide Squad series. I must admit, it was also nice to see the Suicide Squad characters drawn outside of their adult environment.

A non-sexual Harley Quinn is a rarity these days and was a nice touch. The Banana Splits, while an odd choice, pair well with the idea of a super team. Within the Hanna Barbera universe they were a pop-rock band of animals, however in the DC universe they are exactly what they appear to be: giant animals on the loose. Although this title might not be for everyone, I recommend it solely for its humor and niche within the great DCEU.

Better than it has any right to be, the juxtaposition of 1970s characters and a modern team of criminals is funny and interesting in a way rarely found in DC comics. If you like humor, animals, and Amanda Waller this may just be the book for you.