Inspired by the work of H.P. Lovecraft and retro games of yore, Sundered is a gorgeous game that unfortunately misses the mark on everything but style.

Set in a ruined world, Sundered has you taking control of Eshe, an ambiguous masked character tasked with exploring a Valkryian world full of powerful relics and gigantic bosses. From the opening shot I was taken aback by the gorgeous hand-drawn art style that is displayed on every inch of the screen. The visual aesthetics of the game have an animated feel similar to that of a scaled-down Dragon’s Lair with distinguished lines and bold colors. The beautiful palette and line work amplify the eerie nature of each setting in this Metroidvania style 2-D platformer. Indie development studio Thunder Lotus Games put a lot of love into the otherworldly visuals and it shows as each character is stunning in its elegance. 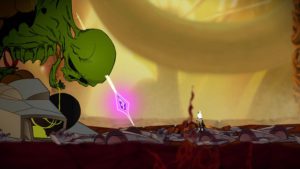 Beginning with the simple ability to jump and dodge, you are quickly presented with combat options and your quest to gather the Elder shards in whatever order you see fit. Each Shard helps you fill out an ability tree that enhances your powers and increases your chances of survival. Sprinkled throughout each labyrinthian level are various upgrades such as a deflector shield or health bars that will aid you in your journey. Each ability can then be upgraded to help you more easily vanquish foes. In a play on the morality system that is so prevalent in gaming today, Sundered offers a play on the morality system by allowing the player to decide corrupt each of Sundered’s Metroid-style abilities, transforming a chosen ability into a more powerful eldritch version. Each choice to embrace the dark power edges the character towards the darker of three possible endings to the game.

While I wasn’t enamored with story captivated by the ambiguous protagonist, each area kept me wanting to see more and helped me piece together the world. The game does an exemplary job of slowly leading you into a greater world full of extremely well designed characters. Just as I felt an area was getting stale, I was quickly immersed into a new zone that offered unique character design and beautifully crafted backgrounds. As in the Castlevania series, each map is a large grayed out area that has you traversing and uncovering different zones and areas. A fantasy aesthetic combined with the steam-punk sensibility gives Sundered the feel of a modern skin over a retro-style game. 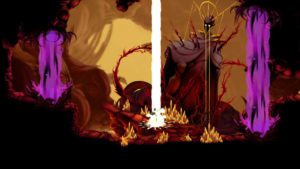 Unfortunately unmatched beauty does not cover up some core flaws in the game. From controls to camera, Sundered suffers from technical lapses that prevent it from reaching the heights of the games to which it pays homage. While enemies and levels are created with the utmost of care, the viewpoint often retracts so much that it’s hard to figure out where the character is on the screen. This makes what is already a difficult battle even harder to complete. 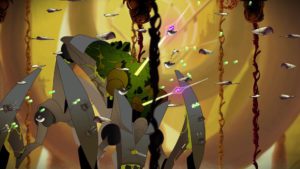 Speaking of difficulty, the laborious nature of Sundered’s battle system, rearranging caverns, and random enemy encounters adds an unnecessary layer of toil that seems to exist only to stretch out the gameplay to the estimated 15 hour run time. Passages and doorways can be hard to find even with a map, causing you to roam around endless caverns with no direction or idea. Where Metroid and Castlevania subtly guide you through a vast map, Sundered lets you suffer as you foray into hall after hall of randomly spawning enemies that fill the screen until you’ve mashed the same button so many times that your thumb goes numb. 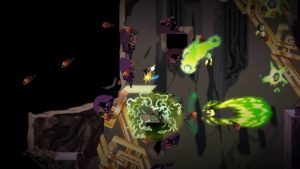 The other downside to the enemy hoards is that they will cause massive dips in frame rate that find your character on the other side of the screen by the time the frame has unfrozen. I also noticed that loading times are quite long, especially for a platformer. I find it odd that in the Modern Age a long load time is still a thing. Even as a friend watched me play she was confounded by loading times that often took upwards of two minutes. The controls also often left something to be desired, with the character often gliding and sliding, making tight jumps quite difficult to master.

Overall, Sundered is a mixed bag of stunning artwork and mediocre gameplay. The epic boss battles and impressive visual flourishes give us glimpses into a well-designed world but often boil down to nothing more than very pretty button mashing. While it pays substantial respect to its forbearers, Sundered often comes too close to the games it admires and fails to distinguish itself from the multitude of Metroid and Castlevania clones.