It’s no secret to anyone who has read my previous articles – “Simply Smashing!” and “Quick Take: Super Smash Bros. for 3DS” that I am a big fan of the series. I’ve been playing extensively since the original on Nintendo 64 and have greatly enjoyed every entry. And unsurprisingly, the 3DS version has easily been my most anticipated game for the year. But does the 3DS version live up to the hype?

In short, abso-positive-lutely. Super Smash Bros. for 3DS is without question one of the most enjoyable handheld experiences I’ve ever had.

But here’s a more in-depth look at what this game has to offer.

Super Smash Bros. has always had excellent mechanics. The original gave a fun arcade-style brawler that was easy to learn, but still gave plenty of advanced techniques for those wanting to go deeper. The sequel, Melee, sped up the battles and expanded the mechanics to include things like chargeable Smash attacks, air dodges, quick smashes, and more advanced techniques that the pro players use in playing even today. The third entry, Brawl, tried to make the game more accessible to new players by dropping the speed down and adding random tripping for the fighters (which is exactly what it sounds like).

The 3DS version takes what was great about the mechanics from the previous games, removes the annoying tripping from Brawl, and ups the speed to a friendly mid-point between Melee and Brawl. It finds what I consider to be the perfect balance with extremely intuitive, responsive, and fluid combat.

One down side to switching over to the handheld (especially for those most comfortable with a Gamecube controller) is that the different button layout (when compared to the Gamecube controller, which was useable on both Melee and Brawl) and different control stick (the more rubbery Circle Pad, which can occasionally become slippery) make the controls initially a bit tougher to handle. Because there are only two shoulder buttons (instead of 3, as on the Gamecube controller or 4, as on the Classic Controller/Pro), the grabbing/throwing of both other players and items (i.e. the ones that aren’t normally thrown) is mapped to L instead of Z (i.e. instead of being on the right side, it’s only on the left).

However, my initial difficulties with the slight control changes quickly disappeared for me as I played a few matches. Hundreds (if not thousands) of matches later, I can easily say that the controls feel both natural and comfortable.

There have certainly been fears that the transition to a handheld would decrease the graphical fidelity; blown up screen shots certainly didn’t help that notion.

But I can very happily say that the characters still maintain a great deal of detail, the environments still look great, and in many ways, this is the best-looking Smash Bros. to date, particularly when viewed on the 3DS screen in proper resolution. With the 3D turned on, it’s even more impressive.

Another concern is the ability to keep track of fighters on such a small screen. While I’d say that there are times where it is difficult to keep track of my fighter, that’s almost never an issue with 3 fighters or less on the screen, and even with 4, it only becomes an issue occasionally in the zoomed out stages (like Pac-Man’s or the Balloon Fight stage). I’ve found that the outlines around characters by default make them much easier to follow and I rarely had problems. If you do ever have a problem, however, you can tap your fighter’s icon on the lower screen and a square reticle will appear around them to make it easier to keep track.

What impresses me most of all with the graphics is the frame rate never dropped below 60fps for the fighters and 30fps for the Pokemon/Assist Trophies, even with 4 fighters, an Assist Trophy, and a Pokemon all sharing the screen at one time. It’s clear Nintendo sucked everything they could out of the 3DS hardware to keep the game running smoothly.

Where the most recent entry before it, Brawl, had 35 characters total, Super Smash Bros. on 3DS has an impressive starting roster of 36 characters (more, if you count the immense amount of surprisingly excellent Mii Fighters you can create) and 11 unlockable characters. While there are, admittedly, a few “clone” characters (i.e. characters that are virtually identical in move sets to others), the vast majority of the new characters are all very unique. I was actually surprised at just how much I enjoyed even ones I thought I wouldn’t care for, like Pac-Man or the Mii Fighters. And even some of the characters that seem most ridiculous (Wii Fit Trainer, for instance) turn out to be some of the most fun to use. Every single new character (that isn’t a clone) has something different to offer and provides a look into some of Nintendo’s incredibly rich past. 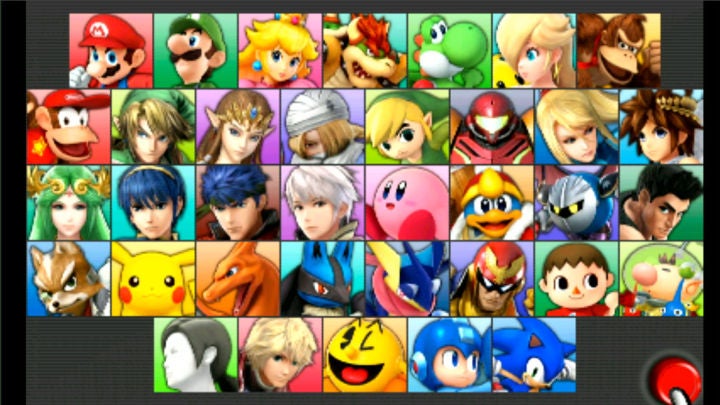 The starting roster for Super Smash Bros. for 3DS

Tomorrow, Nathan will conclude his review of Super Smash Bros. for 3DS. In the meantime, let us know your thoughts in the comments below!