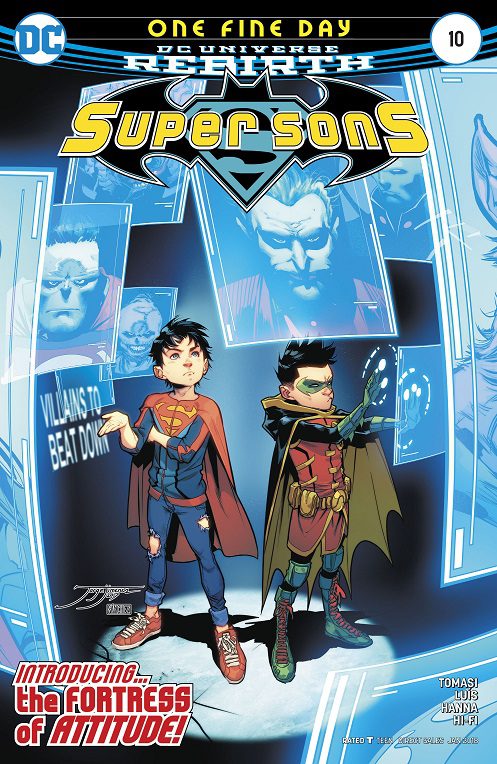 In the middle of the woods on the outskirts of Gotham, school is in session. Jon Kent’s powers are beginning to emerge and Damian is testing his limits. While Clark and Bruce oversee the lesson, Jon finally learns sustained flight under Damian’stutelagee. After the lesson, Jon flies to Gotham to prevent a robbery as Bruce grills his son on any additional power manifestations that the pair of them might be keeping from their fathers. When Jon returns, Damian confronts him about telling Clark about the mission with the Magician and the Teen Titans.

The bond between the two of them continues to deepen as Jon gives Damian the opportunity to remember what it was like to be able to fly and the freedom that it allows. In the future, a lone figure emerges from the ashes of a burning Gotham City and vows to bring back the Apocalypse.

In the present, Batman and Superman decide to get their sons up and dressed. As Batman transports Damian underwater, he tells him that he and Clark have made a decision about what they should have if they are going to continue working together. As they survey the new gift they’ve been given, Batman informs his son that there is one condition. A condition that Damian is going to find hard to swallow and will force both boys to spend more time with each other.

I continue to be impressed with how much fun this book is as a reader. It doesn’t take itself too seriously, but it is faithful enough to the characters to not be parody. Tomasi is great at giving this story a freshness and youth that allows both boys to flourish as fully realized characters. The art is beautiful and I really enojoyed the composition of the panels depicting Superman and Batman getting their boys up. I continue to be impressed with this title.