Supergirl starts off with Shakespeare and ends up singing in this week’s episode. While this was not the best adventure my favorite Kryptonian had; the redeeming qualities far outweighed the bad for me, still landing higher in my eyes than most shows on TV. During this episode we get character backstory reveal, relationship strain, and some powerful, emotional performances. Our A Plot is alright, yet could be better, while our B Plot is stronger, although overly predictable. Even though the bad, isn’t really that bad, and the good, is still quite good; its hard not to take a step back from this episode to view the best part of it as the set up for the wonderful The Flash Musical Crossover episode, but that’s a song for another review. 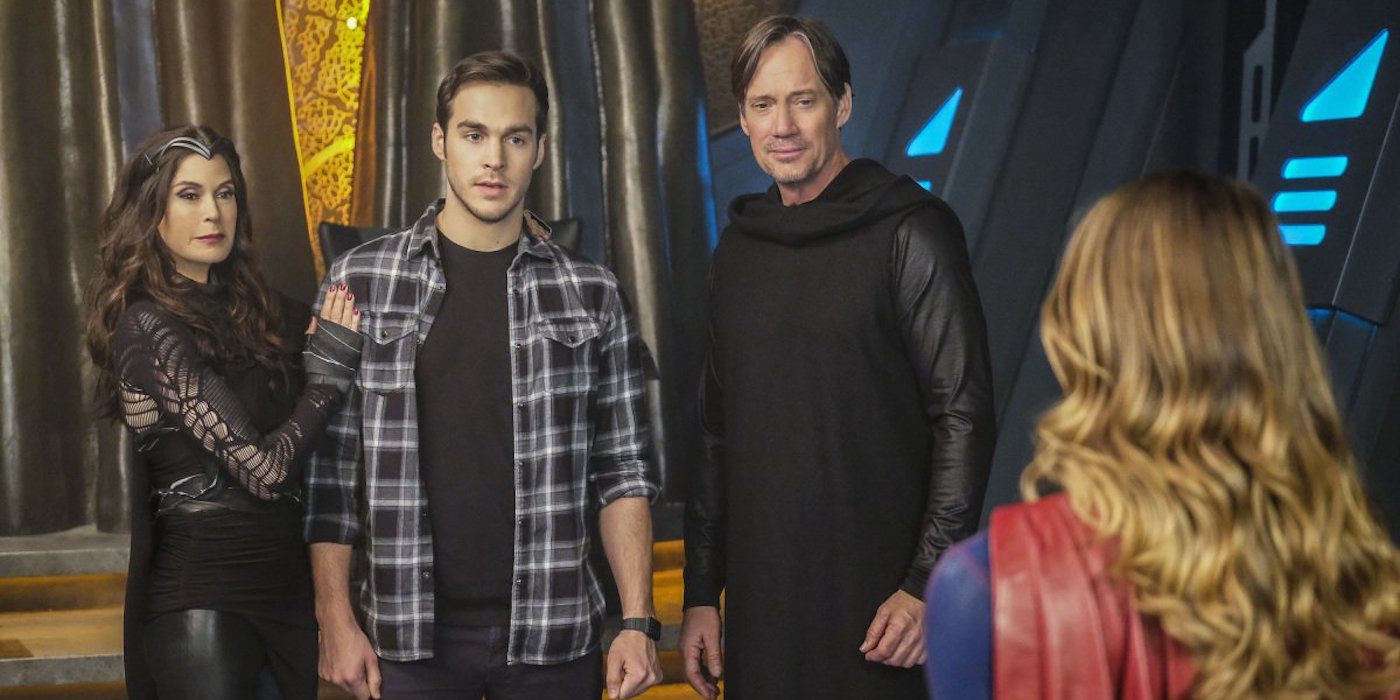 We learned the identities of the characters Terri Hatcher and Kevin Sorbo, along with it we uncover a sizable amount of Mon El’s backstory. This essentially drives the entire A Plot of this episode. A mysterious cruiser appears above National City and the television’s of CatCo, the DEO, and Kara’s apartment (interrupting Kara and Mon-El being adorable and relationship-y, eating ice cream, watching musicals, and celebrating Kara’s (F)unemployment) to  broadcast a demand that Mon-El of Daxum be turned over to them. After Kara faces off against the ship’s weapon system, Mon-El offers himself up, and chooses to go aboard the ship hoping to spare Kara of any potential harm.

Kara then rushes into the teleportation beam with Mon-El at the last moment, and  we learn that Sorbo and Hatcher are playing the King and Queen of Daxum respectively. This comes along with the revelation that Mon-El is not a Daxumite  Royal Guard as he originally had told Kara, but the crowned Prince of Daxum.  Personally, I’m underwhelmed with utilizing Kevin Sorbo and Teri Hatcher in this fashion. It works for the plot, makes for an interesting enough reveal, and adds conflict all around;  but with the plethora of characters from Supergirl /Superman lore that these two could have played, to go this route was just lackluster in my eyes. This reveal takes Kara by surprise filling her with feelings of betrayal, causing a significant rift between her and Mon-El.

Meanwhile, in our B Plot, Winn and Lyra are still in full blown lust, with Lyra twisting Winn’s feelings towards her to convince him to break into an Art Museum for them to hook up. The next day, Maggie asks Winn to go  down to the police station.  He is shown footage of him in the Museum near the famous ‘Starry Night’ painting, which is now missing from its display. Winn remains adamant that Lyra was with him despite the lack of proof on camera, and Alex convinces Maggie to give them 24 hours to sort everything out before she presses charges against Winn. Continuing with the theme of betrayal; it is revealed that Lyra, who isn’t returning any of Winn’s calls, and her species are unable to be captured on photo or video. We also learn that there have been other art thefts fitting the same MO around the area. After tracking down Lyra and the painting to a trailer park;  Winn, Alex, and Guardian fight off two mobster muscle-esqe guys Lyra is associated with and apprehend her. She tells Winn he was a mark and that she didn’t care about him. But, ultimately reveals she’s trying to pick up slack for her brother who fell into debt with a strong and violent alien. 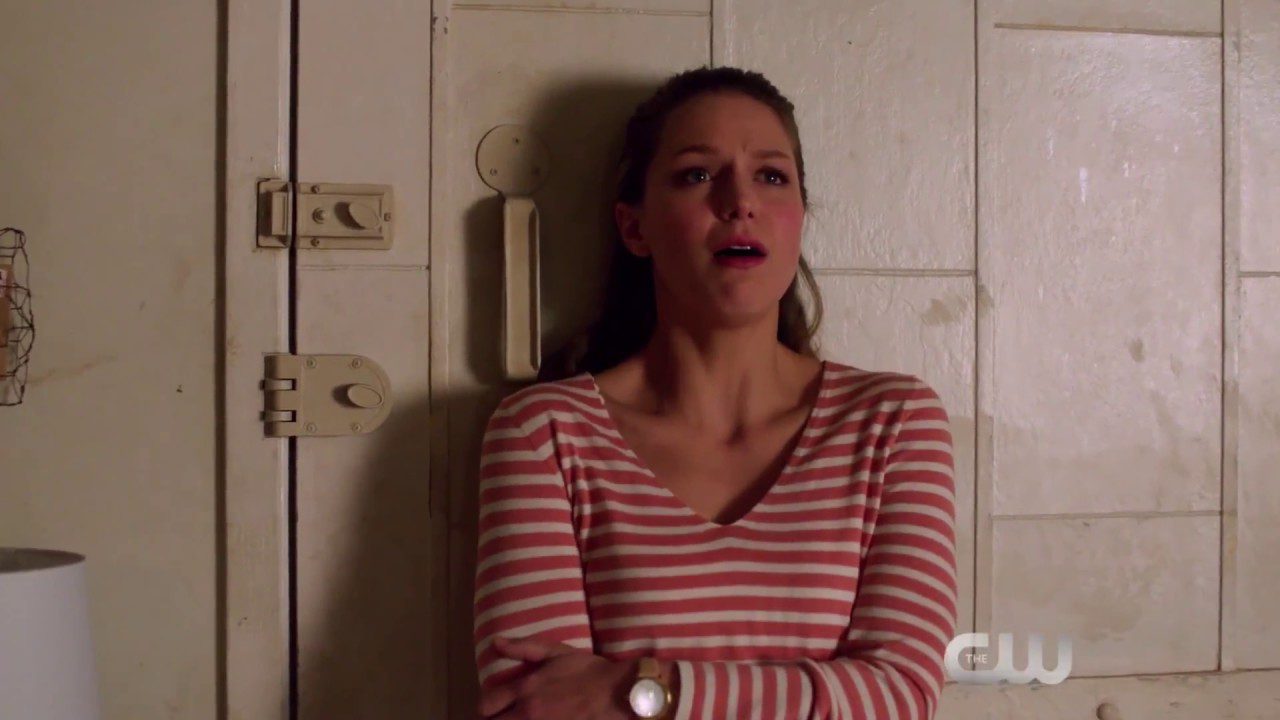 Mon-El visits his parents again, after his mother speaks with Kara having an uncomfortable conversation subtlety mixed with condescension about Kryptonians, and praising Mon-El as the force to reunite Daxum. But, Mon-El refutes his parent’s request for him to return home, showing disdain for how his planet was ruled, and his admiration for Kara. Meanwhile, Winn, Alex, and Guardian free Lyra’s brother and apprehend the head of the mobster alien art theft ring. Winn is cleared of any charges. Kara calls it off with Mon-El, following a very emotional scene, which was as underwhelming as the utilization of Hatcher and Sorbo. Even though I felt the choice and reveal of Mon-El’s identity was lackluster; I cannot deny the very heartfelt and powerful performances by Melissa Benosit and Chris Wood.

When Kara talks with Winn about their respective situations, Winn tells Kara to consider hearing out Mon-El in order to  learn his reasons for not telling her the truth. Just as we are left  with the ‘broken up but still with obvious feelings about each other’ segment of our Romeo and Juliet retelling;  we our introduced to a new criminal being housed at the DEO. Darren Criss of Glee fame is portraying the Music Meister, but his appearance in Supergirl is short. He is brought in, hypnotizes Supergirl, breaks free from his restraints, steal Cisco’s breaching device Winn was working on, and informs us he has to go find the fastest man alive. As our episode ends, Kara wakes up in what definitely appears to be a mobster-era based musical, segwaying into The Flash as she timidly stepping up to a microphone. 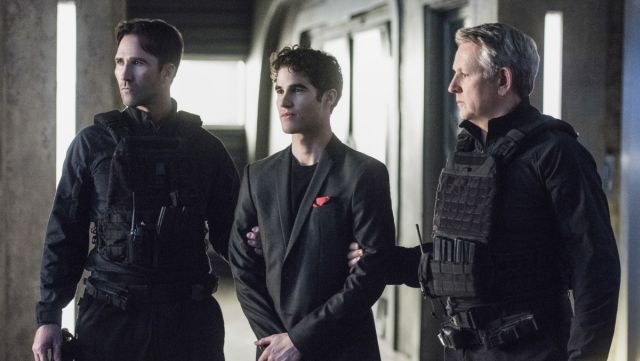 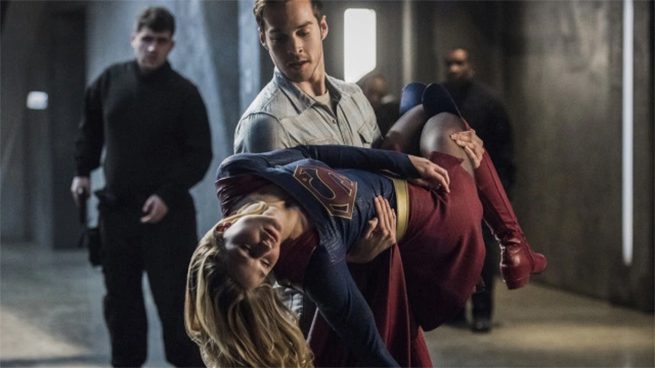 This episode of Supergirl was not its finest. I felt the usage of Terri Hatcher and Kevin Sorbo was poorly decided, and a gross under-utilization of what characters they possibly could have portrayed. Some manufactured tension between Kara and Mon-El is introduced this episode.  Granted, it fits with the story, however I’m unsure how many more times this romance can go from happy to sad to mad and back again. That being said, the raw emotional performances from Benoist, Wood, and Jordan in this episode were all very strong. The B Plot was also strong yet predictable. Between Winn being tricked, alleged that he was just a mark, and Lyra’s confession that she really did have feeling for him, there were good scenes. It also contained excellent performances, and its always nice seeing the ‘Super Friends’ working together in any capacity. Not to mention, that its always nice to allow some of the secondary cast to have a strong place within an episode. All in all, this is far from Supergirl’s best episode, there were  missteps, but still some good as well. However, the best aspect of this episode was that it transitioned into the musical crossover with The Flash. Jump on over to check out my review of that as well, but first, warm up those pipes!

Do Re Me Fa So La Ti Da-on’t forget to #keepitnerdy !