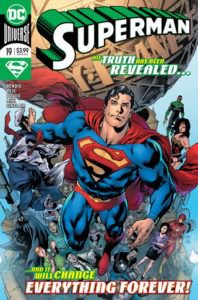 After the history-making bombshell announcement in issue #18, Bendis picks up with a practical conversation between classic characters before launching into a more traditional Superman story. The issue’s sudden jump between fresh new territory and a well-worn enemy illustrates the difficulty of managing an 82-year-old character.

The first half of the Superman #19 provides an opportunity for Bendis to deftly navigate snappy dialog between Perry White, Jimmy Olson, Lois, and Clark in this new reality of the world knowing that Clark Kent and Superman are one and the same. With lawyers watching, Perry puts his journalistic ethics on the line firing Clark for not disclosing his conflicts of interests right before hiring Superman to write for the Daily Planet. This quick turn and witty conversation play into their long history calling out Clark/Superman’s ability to type at super speed and never miss a deadline. Bendis allows Clark a moment to savor this awareness with the rest of the Planet’s staff, creating a touching moment when another reporter thanks Clark for saving her. Afterward, Superman gets a moment of rest with the superhero community and Bendis gets a moment to plug an upcoming one-shot showing how other superheroes react.

The second half of the issue takes place on a distant planet that serves as the return of long-time villain Mongul. This sudden jump in location and tone, unfortunately, feels like any other Superman story from the last few decades. In time Mongul may learn of Superman’s newly revealed identity and the danger it poses to his friends and loved ones, but for now, the action feels stale compared to the novel narrative ground Bendis has started to explore.

Ivan Reis’ art, along with the suite of inkers, provides a sense of life and movement to the battle with Mongul even if it is narratively uninteresting. The artistic team’s use of facial expressions during the first half’s dialog grounds the characters and makes the outlandish reality of a superhero reporter feel human and identifiable.