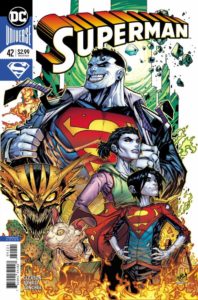 Bizarro makes a pretty compelling, for Bizarro, style speech about who he is and what that means for his planet as he jumps into action.

Meanwhile, at home, Bizarro is dealing with his wife and son as he tries to find some time to relax. As the two of them get into it, Boyzarro decides to leave on his own. When he stops an attack on his pets, a portal appears. A portal that is holding Superboy and Kathy as they watch Boyzarro with curiosity. As the portal closes due to interference, Jon and Kathy wind up back in her lab with Jon realizing that he needs to get home.

We get another peek into the lives of the Kent’s when Lois comes home and Superman tries to surprise her with flowers.  Unfortunately, Lois 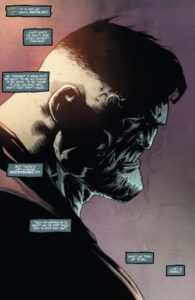 notices something only mothers seem to in a scene that is actually really funny. Especially when the family is at dinner, Jon tries to lie about his activities that day and Clark Kent and Lois Lane go into reporter mode to get at the truth. It’s an endearing scene and reminds me why I enjoy this family dynamic for Superman.

Unfortunately, the light atmosphere of Jon’s home isn’t going to last long when he lays himself down to bed and his sleep is immediately interrupted by an unexpected visitor.

I found myself with some pretty warm feelings regarding this issue and the story itself. There are many fun elements to it and I think it’s a good start to a new storyline involving Bizarro. One that I hope adds dimension to Superman and, by extension, Superboy as well.