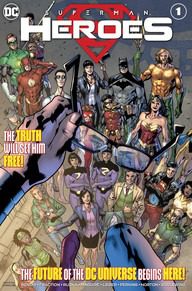 Superman Heroes is an anthology of smaller moments and stories that highlight Clark Kent/Superman and the people in his life. While initially described as a title that would show how other heroes responded to Superman’s revealed identity, those stories only make up three of the nine short stories of this oversized issue. This limited use of superheroes is appropriate and provides a unique look into quieter moments and smaller characters within Superman’s life.

The obligatory Hall of Justice scene that was teased in Superman #18 after Superman’s reveal, turns into a thin splash page and shallow windowed panels where some heroes get a line or two, but it does little to add weight, emotion, or meaning to the unique story of the revealed secret identity. The emotional superhero story is a quiet moody interaction between Bruce and Diana. Artist Mike Perkins’ body language and the shadows from Gabe Eltaeb set a somber mood that carries the emotional weight of the superhero community. The family trauma and recent betrayal by Bruce’s Flashpoint father (during Tom King’s recently ended run) mirror Eltaeb’s dark shadows. The true impact of Clark/Superman’s reveal is not contained within one oversized issue, but it will ripple through other titles going forward.

While Bruce and Diana reflect on the superhero impact, Superman reflects on the impact others have had in his life. The interaction between Superman and his high school chemistry teacher shows the conviction of character that Clark carried throughout his life. The conviction that connects him to his humanity. That same humanity is demonstrated in another story between Superman and Jimmy Olson. Jimmy is Clark and Superman’s friend and Superman to affirm that their friendship remains. This quiet interaction again shows Superman’s human side and reveals that Clark’s social awkwardness is still part of Superman’s humanity. Both stories are drawn and colored in styles that appropriately set their tone. The high school teacher’s conversation is lighter and staged against the glow of a setting sun. Current Jimmy Olson artist Steve Lieber draws the story of Superman and Jimmy and captures the same light-hearted tone of the ongoing series.

Superman Heroes may not be as deep and expansive as fans hoped, but it provides enough to justify the price. Filled with worthwhile stories that explore Superman’s world, the creative teams ground readers in the human side of Superman’s reality.