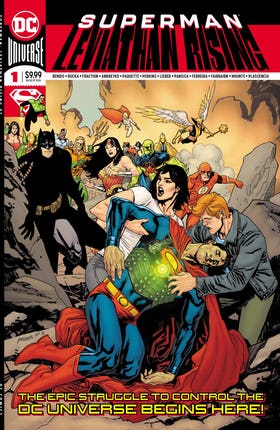 Superman Leviathan Rising #1 brings four writers and five artists together to establish exactly what’s going on in Superman’s world as this crime syndicate makes a move. Leviathan has been brought up in other DC Comics (i.e. one of my favorite titles, The Silencer) but there’s still a lot to learn about this group.

One thing we do know is they like to induce chaos. Of course, it’s hard to systematically conduct said chaos when there’s disorder in your own organization.

While Brian Michael Bendis and Yanick Paquette partner up to tell the main story of Superman in the issue, Greg Ruck and Mike Perkins has something interesting going on, as well The pair give us insight to the mind of Lois Lane as she awaits the return of her love. It’s probably the fastest section of Superman Leviathan Rising #1, but that makes sense. When you’re the one at home while a loved one is off fighting, your mind isn’t going to be a fun place to be.

While Leviathan has some heavy plans in the works, Superman needs to be aware of other powers developing right under his nose.

(Do not continue if you haven’t read Superman Leviathan Rising #1 yet. Spoilers ahead.)

Somehow, someway, Talia al Ghul has lost control of Leviathan again. Maybe the final issue of The Silencer explains how that happens. But she’s still causing problems like she always does.

The fact there’s only a small amount of action isn’t a huge issue by any means. Bendis and the other writers clearly established the issue at hand — while leaving room for several big questions. And we have an idea of the intentions of each major player going forward, as well.

One last, minor thing, the topic of Clark Kent as an actor was a nice touch. But he got the job done in the end. Although, had Talia sent people to study Clark’s behavior more thoroughly, she might’ve known he was acting. Either way, once she put the Kryptonite vest on him, he didn’t have to act anymore. Plus, the plan paid off at least a little. He at least got to see the new head of Leviathan.