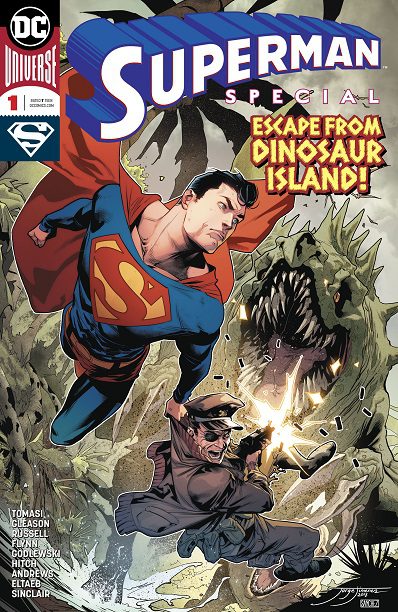 DC Comics released another special to celebrate Superman and this one has another three stories about the Man of Steel and his exploits.

For Those Who Serve

Jon Kent can’t sleep. Thinking back to his time with Manchester Black, he remembers a promise that he and his father made when they were on Dinosaur Island and he implores Superman to go back there and save Captain Storm, who sacrificed his chance at a rescue to send them back. Superman agrees and the two head to the Fortress to work on finding a way back. When they finally decide to leave, they find Storm in a situation that could have been tragic had they not arrived the way they did. When they talk to the soldier a second time, his decision has changed and he really wants to go back home.

I actually like this story. It has some great art and a great tone of reverence to those who serve as well. Storm’s motives and decisions are in keeping with the kind of character he was created to be and his behaviors back in civilization are on par with that. I like that there is a subtle resolution to this story that isn’t overly sappy.

Superman returns to Earth from a mission in deep space and he is feeling week after being away from the sun for a while. On his way back home for a shower, he finds a giant creature attacking the city. While everyone is calling on Superman to kill the beast, Clark recognizes it before it actually is and finds a way to subdue it without killing it. In the aftermath, the damage the creature caused puts Superman back into action to rescue people from a collapsing building.

The story works overall, but it is a little too overly sentimental. The flashbacks to Clark’s youth on the farm are fine, but the story just felt flat and conveyed a lesson that could have been folded into any other more compelling story for the same effect.

This is an Atomic Skull centric story with everyone else taking co-starring roles for the most part. Superman seems to be there to observe Skull’s attempts to be an effective member of Maggie Sawyer’s MSCU team. His back and forth with Superman is effective in showing the duality of his nature and that he does still have issues with both the Man of Steel and his own demons. It comes across well in this story.

Ultimately, as snippets of Superman stories, this issue works and the first story definitely ties up some loose ends from another arc, but there doesn’t really seem to be a compelling reason for this issue in the first place and it feels like filler before a better story begins.