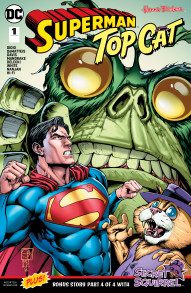 When I saw mention of kale and Wholesome Goods, I figured Superman/Top Cat Special #1 might be a taking a slight jab at Whole Foods’ original founders. Or Amazon’s founder and CEO Jeff Bezos — because Amazon now owns Whole Foods.

Then we realize the owner of Wholesome Goods is named Alexander Mikos. Mikos, Bezos, close enough.

What fully confirmed though: the robot Mikos used to attack Superman when he and Top Cat realized what was really happening. The robot’s name was Amazo Prime. I appreciate subtlety as much as the next person, but this was a great move by Dan DiDio.

DiDio wrote a fun story on the whole, too. DiDio had one of the better pairings in the Hanna-Barbera – DC crossovers. Top Cat is conning everyone he can, per usual, and is paired with pretty much his opposite. I wouldn’t mind seeing them work together again. They keep it fairly light, as it should be with Hanna-Barbera cartoons.

And as great as the whole Mikos-Bezos thing was great, I think the undisputable best part of the issue was Top Cat meeting Clark Kent.

Took him all of two seconds to realize Kent was Superman. Yet pretty much no one in all of DC can see through that brutal disguise. I guess it’s easy for a conman to pick out another con.

Speaking of cons, I love how Top Cat thinks he can dupe Superman. Like, you’re a cat. He’s SUPERMAN. I understand he tries to see the good in people, but he’s not dumb.

Speaking of dumb, the second and third sentences of dialogue in the story were beyond stupid. (Not stupid writing by any stretch. I actually appreciated DiDio starting it on a funny not.) The came courtesy the woman at the Chopped Salad Society Annual Mixer:

“I learned a little trick with broccoli rabe. Try numbing your lips and tongue, everything goes down much easier.”

I’m all for eating healthy, but do people actually do this?