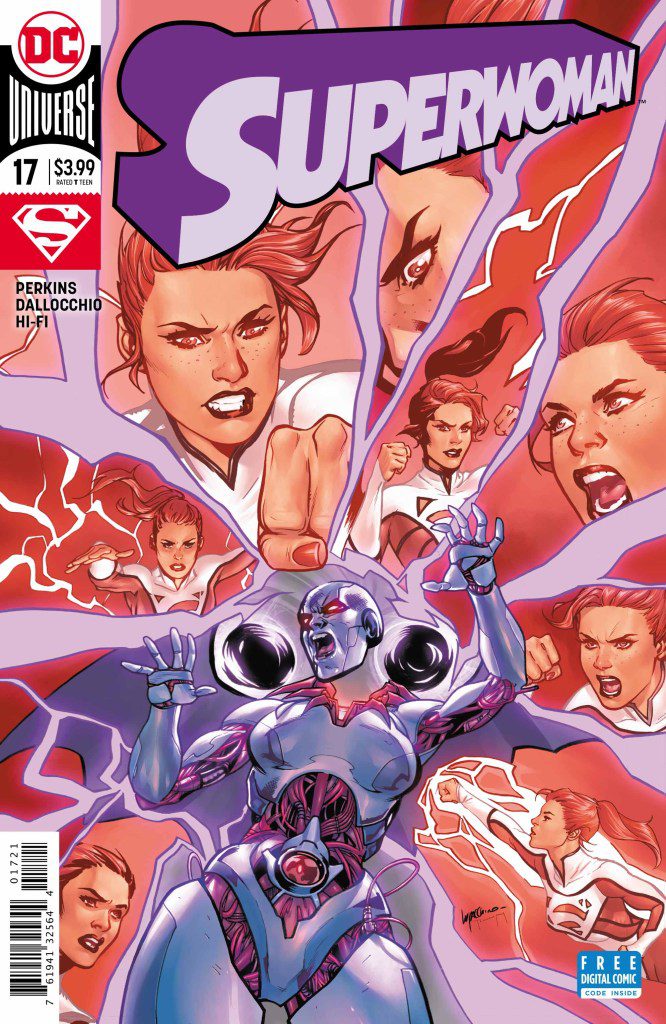 Superwoman #17 starts off with nonstop action in each panel and doesn’t let up, save for a dream sequence involving a high school friend named Clark. During the issue, Superwoman is shown how frail she can be by nearly being killed by her chief adversary of the issue, Midnight; a villainess who seems very keen on taking Superwoman’s powers if she doesn’t submit to her will. Suffice to say, I have never heard of this villainess who looks one-part Brainiac 4 and one-part Brainiac 8. It is refreshing seeing new characters in comics, and of course characters like Maxima and Natasha Irons, who we do not see in, dare I say, any of the other DC comics, make their presence known by some excellent panels of art and writing. Midnight seems to be hardwired with codes and protocols for how she operates, which is probably the design of her master. Superwoman must make a choice with the help of her allies on how to defeat Midnight before being dragged asunder herself.

The scenery by Federico Dallacchio is sprawling with mid-air melee, skyscrapers and buildings, and rustic farmlands in Smallville from Lana’s dream sequence. 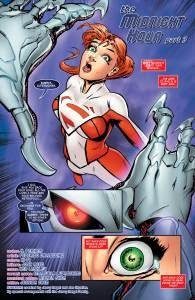 Immense details are given on some shots that depict elements that further the story and an air of cloudiness for the background of those shots that are of little importance such as the buildings. However, the details of the latter still shone through. Extra credit goes to those shots of panels with lights and the artist’s ability to express the curvature of the characters’ bodies, especially Natasha Irons and Midnight on page 5. Maxima also looks terrific in most scenes, but Lana as Superwoman is stellar in pages 4 and 8.

The writing by K. Perkins is fresh to me since I am not used to reading this title. It doesn’t feel as forced as some books and the dialogue flows smoothly from start to finish, not even hitting a bump, which is sometimes what happens in dream or flashback sequence. The book’s dialogue doesn’t pander to everyone’s needs by giving superfluous information away to the reader in subpanels such as little FYIs that are the bane of every reader’s attention. Such as those that are followed by an asterisk that requires the reader to go searching for another book to explain what is happening in whatever pane the asterisk is in. There also isn’t an abundance of hifalutin words or shit that sounds made up like just about any gadget on the CW’s Arrowverse, ahem, Flash and Legends of Tomorrow I am talking about you!

The short of it is this book is very good and ended too quickly leaving me wanting to pick up the next one. I was also surprised at how great this one is considering I had never read this title before. I would like to see the same amount of action in the next one and hopefully get the backstory on Midnight, unless I missed it in an earlier issue. Kudos to the team that made this comic come together.