By now we’ve all heard the news of Swamp Thing’s premature cancellation, and as of this writing, the rumors still swirl as to what caused the axe to fall. At a time like this, a eulogy feels more appropriate than reviewing the most recent episode. So it was difficult to resist the urge of typing a “Swamp Thing, we hardly got the chance to know ya!” sendoff piece. You see, that would be terribly boring and rather than focus on what’s to come, I’d rather concentrate on what we currently have.

In reality, even with the bad news, we still have the chance to finish the season and there is plenty of monster mayhem to enjoy before it’s time to say goodbye. It’s okay to whistle past the graveyard in this case. Although, I must admit this outing makes pulling the plug a little less painful.

Hold on now. Before you go sending some Louisiana gris gris my way, hear me out.  Episode three of Swamp Thing is good, not great.

This installment showcases the supporting cast, and it handles that responsibility from multiple angles very well.  In a scene where Jason Woodrue examines the corpse of Eddie Coyle, he comes off as a condescending, creepy jerk. A mutated heart that Woodrue uses to test Abby’s abilities as a scientist serves as a metaphor for what could be his true motive. It’s a nice touch considering, later on, he and his wife Caroline share a tender, and telling moment.

Maria Sunderland’s role is also quite intriguing. Her backstory is built around the debilitating loss of her daughter Shawna. Abby’s return to Marais has stirred up her feelings of grief, relegating her to sympathetic character status. Here she finds strength in a most unusual ally that makes you wonder if she has found her voice, or completely lost her mind.

Liz Tremayne hits up one of her sources searching for answers, Matt Cable tries to create a love connection, and more light is shed on Avery Sunderland’s sordid affairs. All three are staples from the source material, and each individual plot thread is played out well. It’s especially nice to see Liz and Matt fleshed out more. They felt like small pieces of the puzzle during the first two episodes.

On the other hand, while those appearances were enjoyable, a brief bit with Dan Cassidy and Xanadu nearly gets ruined by a product placement for beer.  I know, I know. Gotta pay the bills, but it was off-putting.

Notice I haven’t mentioned Swamp Thing yet? While getting a good look at him right out of the gate, he still isn’t given ample screen time on a show bearing his name. Andy Bean returns as Alec Holland, adding more murkiness to Swamp Thing’s purpose. Still unsure of who or what he truly is, a dream sequence is used to set up yet another frustrated roar.

But hey, this episode is titled “He Speaks” right? So this is it! Finally, we get our star a turn on center stage and hear that signature speech pattern. Well, yes in a way,  but it won’t illicit the ghastly goosebumps you may have dreamed of.

The action that sets up Swampy’s first words is also lackluster. When Abby Arcane investigates what’s left of Alec’s lab, a new type of infection, independent of the swamp flu, shows it’s ugly face. Swamp Thing engages in what I would describe as a shoving match with the menace, handling the situation quite easily. The combination of saving the day and connecting with Abby should have more of an impact. After witnessing the evisceration that befalls Swamp Thing’s enemies, this outcome will elicit a few yawns.

All of the visual and horror components we’ve become accustomed to with the series are still intact. Fair warning though, if you’re the kind of person who enjoys a snack before watching a show, skip it. It’ll take some serious intestinal fortitude to stomach the opening sequence. Go ahead and save those nachos for when Swamp Thing is over.

Fans of the comics should be pleased with a nod to the Rot, an elemental kingdom with the ability to control decay featured during the New 52, and going much further back, a nice little Conclave namedrop. The latter will also make fans ears perk up, especially with whom it’s directed at.

“He Speaks” falls just shy of meeting the standard set by the previous set of episodes. Mainly because the Swamp Thing we get didn’t do enough. I can accept a slow burn, but when our hero gets his chances, make them count. The previously prominent wow factor took a wrong turn and wilted. You know what though? Everyone is allowed an off day, even if they’re not fully human, so I’ll give the big green guy a muck-encrusted mulligan. 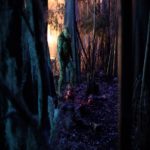