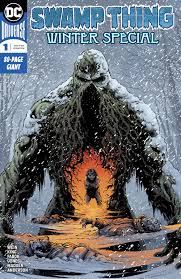 This book starts with a beautiful story by Tom King and Jason Fabok, about monsters. It’s amazing to me how Tom King, as a writer, is able to do so much by using so little. Swamp Thing, when done right, is very impactful with very few words, and King pulls this off flawlessly. The pairing of King and Fabok, really nails the feel of Swamp Thing. The story is poignant and heartwarming all at the same time, in an eerie sort of way. Fabok does a great job taking swamp thing from a hulking behemoth to an emaciated shell. Swamp Thing is a character that lives outside of our human laws and morality, not within the black and whites of humans. This story does a great job exploring the minutes of the grays, that he exists in.

The second half of this book is a story by the late Len Wein. It was meant to be the beginning of a new series, but unfortunately, Wein 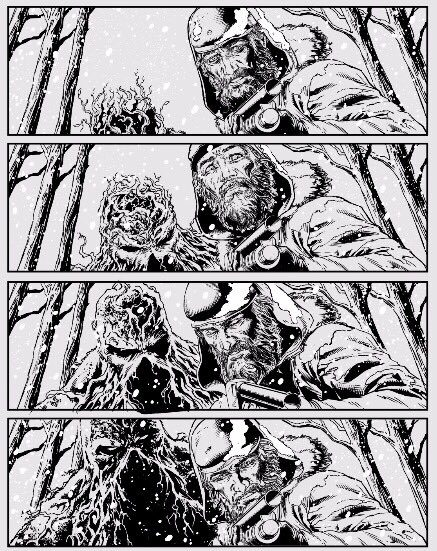 passed before the book was finished. The Artwork from Kelley Jones is just awesome, but they left the story itself without any text. They do include Wein’s script after the story. It’s the beginning of a story with Swamp Thing, Batman, and Solomon Grundy. The details from Wein’s script that make it into Jones’ art are really exciting. It does make me sad that we won’t ever get new Swamp Thing Wein stories, but this was a great one to go out on.

We lost two truly incredible creators in 2017 with Len Wein and Bernie Wrightson, but they live on in their creations, such as Swamp Thing, and it is awesome to see them honored in a book like this. King and Fabok seemed to take this very seriously, and it came across beautifully in their story. These two creators will be missed, but they will never be forgotten.

If you are a fan of Len Wein, Swamp Thing, or Tom King, you are definitely going to want to pick this book up. It is a great tribute and an all-around wonderful story with beautiful art.