The Popcorn Podcast kicks things off big with a #AlmostHuman reunion of all 3 MX’s! Chad and Natalie welcomed Garfield Wilson, Darren E Scott and Anthony Konechny to kick things off! They each share with us tales from their time on Almost Human, upcoming projects and Garfield belts out an amazing rendition of Bon Jovi’s Wanted Dead or Alive. They discuss #SaveAlmostHuman as well as the Crazy Beautiful fan girls, Anthony get’s shirtless at some point, and an amazing time was had by all. We are all sad to see Almost Human go, but are greatly anticipating what we get to see these gentlemen in next. For those of you who would like to see the craziness first hand, it can be seen at http://youtu.be/cvz4qZRzkr0
You can follow them on Twitter @DarrenEScott @AnthonyKonechny @garfieldwilson

Almost Human – Almost Made It

Is there anything JJ Abrams hasn’t got his fingers in lately? If he’s not working on films (as we geeks all know he’s the man behind the next Star Wars), his Bad Robot production crew is pumping out television series as well. (Revolution and Person...

Watch us on Twitch 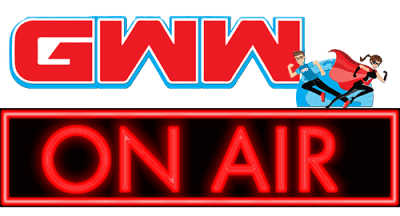 I don't feel lucky
Lenovo Yoga Smart Tab
Free GWW t-shirt!
25% Insider Discount
15% Insider Discount
Get your chance to win a prize!
Enter your email address and spin the wheel. This is your chance to win amazing discounts!
Our in-house rules:
This website uses cookies to improve your experience. We'll assume you're ok with this, but you can opt-out if you wish. Cookie settingsACCEPT
Privacy & Cookies Policy