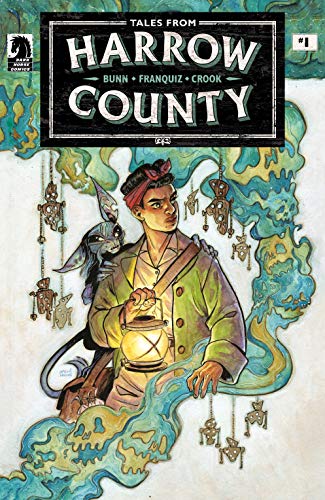 I would consider two major components to consider when performing magic or rituals are intention and offering. One deals with what you want while the other deals with what you’re willing to do to get it. I have read enough to understand the consequences of a miscalculation or assumption with either.

Issue # 4 of Tales of Harrow County is titled Death’s Choir. A song, a spell has been cast that now calls forth all those who have passed on, whose final rest place is in Harrow County. Mrs. Dearborn well intention only wants to see her son Gerald. She imagines everyone would want the same. Even imploring Bernice to help her neighbors.

Thankfully Bernice is there to provide clarity. By dealing with goblin magick, Mrs Dearborn has already released some other things besides the souls of the sons of Harrow County. The story keys in on this aspect of magick, the be careful what you wish for. By leveraging her wish in this type of ritual, Mrs Dearborn fails to also ask the question what am I willing to risk or give up.

Have you seen this:
Superman son of kal-el #1 (review)

Tales of Harrow County #4 is a conclusion for the chorus. The art has a pastel feel which shines in this helps the colors stand out. Most notably are the scenes of loved ones speaking from beyond the grave.

Though her efforts are successful Bernice suffers loss as well, much to Mrs Dearborn’s delight. Unfortunately, stopping magic is just the same as starting it. Tales of Harrow County Issue 4 aks what do you want and what do you have to lose?