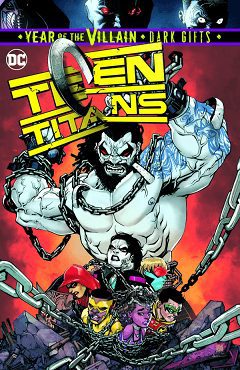 Mammoth and Shimmer have moved on from small-time heists to human trafficking and the Teen Titans are there to take them down.

With the team still not trusting each other and especially their leader, the fact that they still act like a team and bring down the villains quickly is exactly what Damian wants to see. Unfortunately, something still bothers him.

With the very real prospect of a traitor in their midst, Damian seeks answers as he goes over the roster and any possible motives they might have to betray him. To make matters worse, he has forgone his private prison for a new kind of punishment for the villains he’s captured. At the same time, Lobo is healed by Lex Luthor who makes him an offer that will lead to another confrontation with his wayward daughter.

Depending on the interpretation, I’ve always been hot or cold on Damian as a character. This issue made him more interesting as both a character and leader. While his arrogance continues to be an issue, the results of his plans are interesting to witness. Changing the dynamics of the fight for justice the way he has opened up some really interesting and engaging storytelling from Adam Glass. The story reminds the reader of just how dark Damian is in his vision and the steps he’ll take to maintain it despite objection. It will be interesting to see how his fragile team holds together once the scope of his plans become known to the rest of them.

Sean Chen does an excellent job with the art in this issue. The action is dynamic and the composition of panels flows well with the tone and pace of the story.