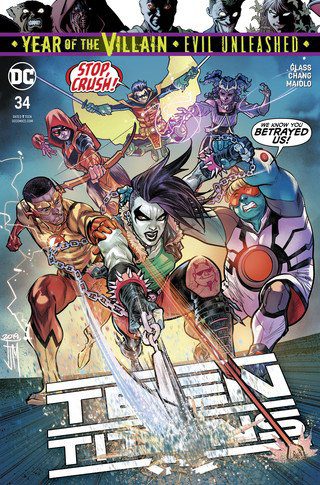 Damian continues to be satisfied with the way that he has “treated” the inmates in his private prison. Even Wallace has to marvel at the fact that they seem to be functioning members of society. Unfortunately, nothing can stop the internal strife that has been driving a wedge between the Titans beneath the surface.

When Djinn discovers that her ring is missing, Robin puts the facility on lock down until he can discover who actually took it. Knowing that possession of the ring means possessing Djinn herself, Robin proceeds to watch and interrogate everyone on the team. Using techniques designed to get to each member, he is determined to both find the ring and flush out the traitor among them. What will be interesting to see is whether the son of the World’s Greatest Detective has the skills to find the danger right under his nose.

Dealing with the team’s internal strife is interesting and entertaining plot, but this just felt corny. A stolen ring being the catalyst for both a lock-down and investigation just felt forced and contrived. It’s a shame because there are some decent character moments throughout and some relationship dynamics worth exploring, but they are mired in a pretty substandard investigation plot. The worse thing about this issue is this story took a long, meandering journey to what turned out to be a pretty decent reveal.

Bernard Chang’s art is great throughout the issue and the final reveal at the end is framed beautifully.