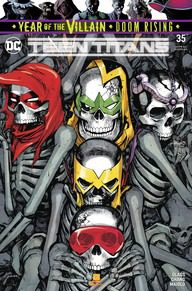 The Teen Titans will finally confront the traitor in their midst and the revelations about his past will change the team forever.

Djinn comes to Damian and attempts to get him to open up about his feelings for her. At the moment he begins to let down his guard, he finds himself in his own prison chained up with the rest of the Teen Titans and the traitor among them revealed.

The traitor gives away every secret he has managed to glean from Robin and shows them all that their leader is no hero. It’s a moment filled with pain for the character and showcases the collateral damage that being a hero can bring. His tragic story aside, his act of vengeance against the Titans will take one of their own and send another into a violent rage that threatens to kill them all.

Adam Glass crafts an entertaining and tragic story in this issue. The dialogue is well written and the plot has great pacing that keeps the reader engaged. There are great moments throughout, but I would have liked to see the rest of the Titans experience them rather than hearing about them. It would have added more weight to what they were experiencing if they were experiencing it rather than being told.

Bernard Chang delivers some great art in this issue. There are some awesome visual moments throughout including a dark scene that sends a character down his dark path and a brilliantly done fight scene between characters.