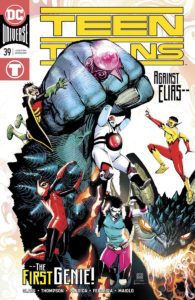 In an attempt to free Djinn from her prison, the Titans will take on her powerful brother and his army of demons.

Fighting their way through a temple in Qurac, the Teen Titans have a plan to finally free Djinn from her prison within her ring. They need to trap her brother Elias and force him to free him and they know what weakness will bring him to his knees. As they make their way into the chamber and prepare the spell to bind him, the demon himself emerges and takes the ring back from them, increasing his powers.

He enters the ring to give Djinn an ultimatum regarding her friends and she reluctantly brings him the last thing he needs to complete his power. As the team fights against him, Djinn makes a sacrifice that will save her friends but could doom the world.

Glass and Thompson bring an immediacy to the story by starting it in the middle of the fight to save Djinn. While some of the humor is a little stale, the dialogue is great and I love the team dynamic and how they interact with each other. The plot is laid out well and the rising tension is paid off with the Elias/Djinn moments and the pace of the story. The story is entertaining. The characters are engaging and the action is great. A fun story with a great payoff at the end.

Pansica delivers some dynamic visuals in this issue. The characters look amazing and the action is big, bombastic and filled with energy.