The Warner Archive Collection is bringing another Warner Brothers Animated series to Blu-Ray for the new year. 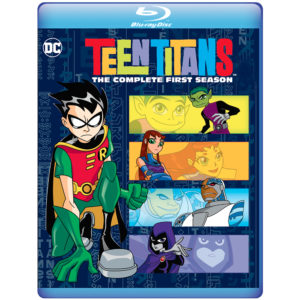 With awesome super skills and powers galore, these crime-fighting partners kick butt and squash evil like nobody’s business! But as roommates in Titans Tower, it’s every hero for him/herself when it comes to living in peace. Not even super heroes can settle fights over who’s in control of the TV remote.

In these 13 action-packed adventures, the Titans face all your favorite villains – Mad Mod, The Puppet King, Killer Moth and, of course, their arch-nemesis Slade – in one power-packing showdown after another. Some battles even pit the Titans against each other. Featuring bold animation, funky music and fun characters, this complete Season One from the hit TV series is an intergalactic knockout.

Teen Titans: The Complete First Season will be released on Blu-Ray/DVD January 23, 2018.