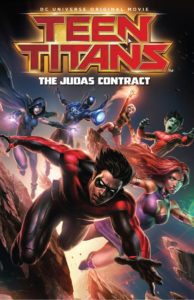 This animated film is based on the classic story by Marv Wolman and George Perez. It is a seminal moment in the history of the Titans and exposed all of them a level of danger that the young heroes had never faced before. The latest DC animated film, directed by Sam Liu tries to tell that story in a new way. Does it succeed? 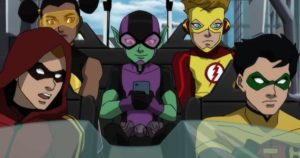 As the DC Universe animated films continue to evolve, they invariably continue plot lines and characterizations from the previous movies. Something I appreciate, especially in this one. One of the things that worked for me was the characterizations of the Titans themselves. The movie opens five years earlier with the Titans trying to rescue a heavily outnumbered Starfire who is being attacked in the middle of the city. As they decide on a course of action, there are definite rumblings of feelings swelling in the, let’s say heart, of Dick Grayson’s Robin.

Five years later, the team is set to take down a group of mercenaries stealing electronic equipment and we get a sense of the new team dynamics. Apparently, Dick (who has taken on the persona of Nightwing) has been gone long enough for the newest Robin Damian to be part of the team and for additional members to be added including Raven, Blue Beetle and Terra. It’s interesting to see the Jaime Reyes character continue to struggle with the Scarab symbiont even now and there is the sense that it’s picking up on something that readers of the original story already know. 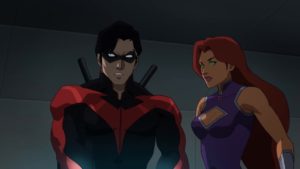 The moments between Dick and Damian play out well as both seem to be less wary of each other and there is not only brotherly concern from Dick, but a grudging respect from Damian as well. The moments between Dick and Kori are well done and it is interesting to see their dynamic play out as both try to find their way. One as the previous leader of the team dealing with his role as a subordinate and the other deals with her position as the new leader amongst a group still looking to Dick for guidance. There is another dynamic that I find interesting to see play out and that is the almost parental nature of Robin and Starfire’s relationship to the rest of the team. Like many parents, the want to believe in the best of their child, but Damian does have a point about making decisions with your heart and the consequences that will bring. Something Robin learns right away when he follows Terra and runs into Deathstroke 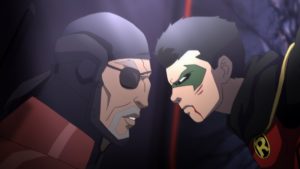 Deathstroke is well used in this story and I liked the call back to the previous DC animated movie Son of Batman in his interactions with and animosity towards Damian. It’s an effective hook that kept me interested because the lack of Damian’s personal demons weighing on him made him a bigger threat than the rest of the Titans. The villain in the piece is Brother Blood, a classic Titan foe that is used for good effect here. The fact that the cult leader has a public persona enhances the story in my opinion. The dynamic plays itself out well as we learn more about his overall plan. 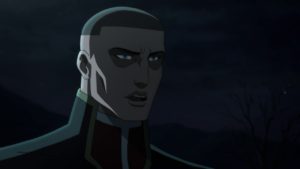 The action scenes worked really well and the every character used their abilities to great effect. It was nice seeing them work as a team. 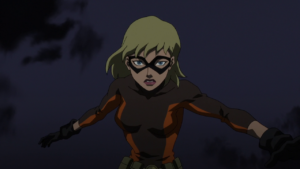 There is nothing in the character, the interactions or performance that would make me think anyone would want to be around her as a person, let alone a trusted team member. She’s annoying and watching Beast Boy constantly trip over himself to connect with her is more annoying. In the original books, there were moments when I liked Terra, which made it a surprise when her motives are revealed. Even in the moments when I am supposed to care about Terra, I don’t. I know that in the small amount of time that the filmmakers have to tell the story, there isn’t a lot of time that can be taken to deal with character development, but Terra is the new dynamic that has repercussions to the rest of the team and there wasn’t enough there to invest to make me care about what she does and ultimately, her fate. 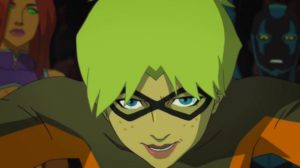 This is definitely a movie worth seeing. I enjoy the DC animated features because they seem to consistently push the envelope as far as storytelling and they have no problem using the rich tapestry of stories that they have been able to create. The villains worked really well in this movie as well with both Brother Blood and Deathstroke being credible threats that must be overcome.

DC Animated movie teen titans The Judas Contract
Are you an Insider?News, reviews, & updates are just the beginning.