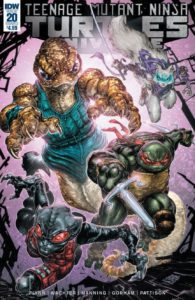 This book picks up right where issue 19 left off. Raph and Alopex are trying to rescue some pets, but are currently stuck fighting with Zodi, a mutant Scorpion, and Krisa, a mutant python. During the battle, Alopex tries to “reach” Krisa with a heartfelt speech about being her own person, this resonates with Krista, who is striving to do the right thing. She helps Raph and Alopex by holding off Zodi, so they are able to rescue the stolen pets. Alopex tries to get Krisa to come with them, but she won’t leave. This upsets Alopex because she really thought she was able to get through to Krisa.

Since the pets were liberated by Raph and Alopex, Zodi and Krisa have to answer to their big boss, Null. Zodi takes the blame for everything which leaves Krisa puzzled as to why she would do something like that. 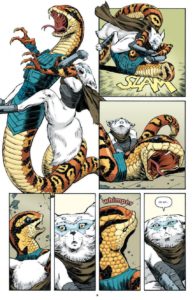 There are some excellent character moments in this issue. Zodi’s layers are really being peeled back. You realize there may be more to her than just some operative within a secret company. You’re also able to see Alopex’s compassion for other mutants. Raph and Alopex’s dynamic is sweet and refreshing. Krisa seems to be a great additional character. She’s very reluctant and wants to do the right thing, she just isn’t sure what that is yet.

The second story is a charming little bit about Raphael coming home, wanting to get some sleep, but his other brothers aren’t letting this happen. I’m a fan. I really enjoy how it showcases the relationship between Raph and some of the other turtles.

I know I’ve harped on this before, but this book and the TMNT ongoing from IDW are two of the best books I’m currently reading. They are constantly firing on all cylinders. The stories are great, the art is great, the coloring is great. I just can’t speak highly enough about these comics! Even if you aren’t a huge TMNT fan, I think you could find something you’d really enjoy about this series.