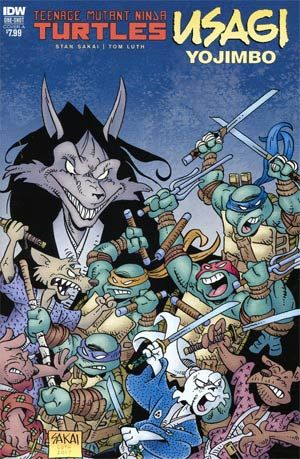 When I was a kid I only knew that rabbit samurai because of the TMNT toys Back then I didn’t really know that Usagi Yojimbo was a character from another comic. Usagi and TMNT’s first comics were both published in 1984. And honestly, these two properties were made to cross over with each other!

This One-Shot is written and drawn by creator Stan Sakai. The art style and story are incredibly charming and whimsical. I personally have never read any other Usagi stories, but I very much enjoyed this one. 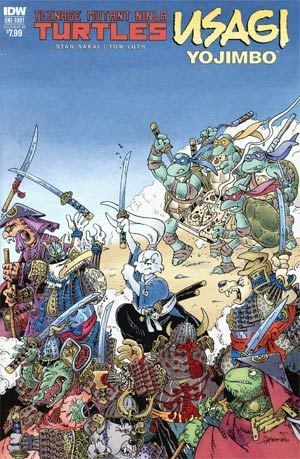 Usagi Yojimbo is summoned by “The old one” who turns out to be Usagi’s world’s Splinter. Splinter needs the help of the rabbit ronin, to help him on a journey to restore the mystical rock the Kanameishi. In doing this the will save their land from being destroyed by the giant catfish Namazu. But the evil figure Jei, who believes himself to be the servant of the ten thousand gods, will stop at nothing to prevent them from fulfilling their quest.
Splinter knows that he and Usagi are no match for Jei and his hoard, so he summons the turtles through some kind of magic. With the help of the turtles will Splinter and Usagi be able to defeat the evil Jei and restore the Kanameishi to protect their homeland? Pick up this wonderful one-shot and find out!

A great and fun story that I really enjoyed. I love the art and the folk lore-y style of Sakai’s storytelling.