Today is the day of the Mad Titan. Not only does Avengers: Infinity War come out today, but he also claims the coveted Marvel Comic of the Week with Thanos Annual #1. This is no easy feat this week; Donny Cates also put out two stellar Doctor Strange comics ending the Damnation event, and we also get the finales of Avengers: No Surrender and Jason Aaron’s Jane FosThor epic in The Mighty Thor #706. Huge week for the Avengers…and Thanos beats them.

Not without aid though. His Black Order consists of some of Marvel’s best, and they assembled a truly spectacular anthology of Thanos. The theme is death, but it goes beyond characters. Thanos is out to kill the future, out to kill faith, and out to kill hope. There is some strong—albeit dark—humor in this book, which nicely balances how truly sinister some of the stories in Thanos Annual #1.

Thanos Annual #1 bridges Donny Cates’ Thanos run with Geoff Shaw and Antonio Fabela, and his upcoming Cosmic Ghost Rider with Dylan Burnett. The stories are framed as Frank Castle, the Cosmic Ghost Rider, recounting some of Thanos’ deeds in the afterlife. I am a huge fan of the recent Thanos run, so I’m glad to see the epic continue. This is a beautiful finale from the artistic team. The afterlife is a vibrant place, and Fabela’s colors are amazing. Shaw’s character work is superb. He excels at subtle shifts in body language during talking head sequences and dramatic contrast between Frank and his audience. The revelation of who Frank is talking to is an excellent teaser for what’s to come.

They also draw the first of the tales in Thanos Annual #1, which pits Gamora at the psychological torture of her father. It’s a clever use of an alien species and a traumatic look into Gamora’s childhood. Its the type of darkness this series excelled in; it’s also the type of dark combat that this series is notable for. (You should see what they did with Mjolnir in Thanos #17.)

My favorite tale is “What To Get From The Man Who Takes Everything” from Chris Hastings, Flaviano, and Federico Blee. It is a dark comedy about a man named David, who Thanos visits on his birthday every year but one. There are some great exchanges between Thanos and David, that Falviano gives great dramatic effect. Blee’s colors add a nice glow to the world despite the dark humor. I imagine we will see this on social media in the days to come because it is beautiful in its brevity. 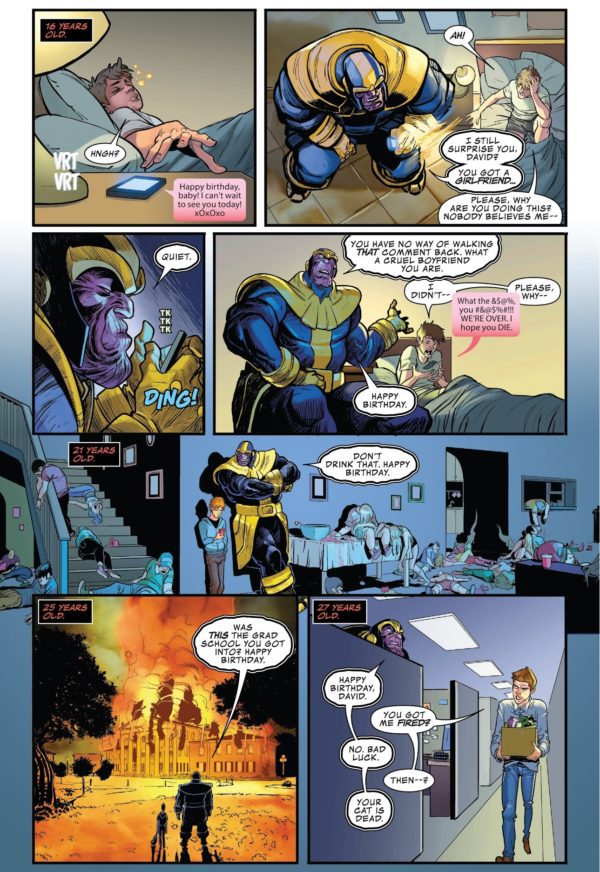 Al Ewing, of Ultimates fame, shows up to apply his particular sensibilities to the Mad Titan, and it is unsurprisingly fantastic. Thanos is puzzled by a question and he goes to depraved depths to answer it. This story has Thanos going after the idea of immortality and ties in nicely to Cates’ coda at the end of the book. Frazer Irving is the perfect man to pair him with, because of his signature style. He creates an alien-based technological world that looks unlike anything else we’ve seen in recent Marvel cosmic tales. His color scheme is fantastic and elevates his art.

Ryan North, Will Robson, and Rachelle Rosenberg deliver a sinister tale about Thanos saving an old lady crossing the street. Will Robson and Rachelle Rosenberg strongly deliver the dramatic effect of Thanos’ actions. It’s a seemingly cute tale and Ryan North (Unbeatable Squirrel Girl) has some of the best comedy chops at Marvel. But by the end of the tale, Thanos learns he can kill hope in an evil moment that the creative team also nail the emotional effect of, thanks to Rosenberg’s bold colors.

Kieron Gillen, Andre Araujo, and Chris O’Halloran deliver another exaggerated comedy with a sinister outcome. Kieron Gillen and Andre Araujo have done great things together in The Wicked + The Divine, and this is another home run for the creative team. The tale caps off with Thanos giving a beautiful monologue of catastrophic death to Lady Death. Chris O’Halloran’s colors turn Thanos’ statement into a beautiful, brief moment of art.

Katie Cook and Heather Breckle deliver an embarassing moment from Thanos’ past. In it, Thanos discovers an alien race called the Adorales, who look like they walked out of a children’s book. It serves as a lesson for Thanos about doing work yourself, something he’s rather infamously said in the MCU. It’s a cute tale and it allows Frank Castle to deliver some brevity amongst all the dread.

Thanos Annual #1 is filled with some of Marvel’s best colorists, writers, and artists. It delivers a variety of visual and tones of humor that still pale in contrast to how evil some of the tales get. This is a stellar moment in Thanos’ comic book history and it’s a great way to kick off the Avengers: Infinity War season.