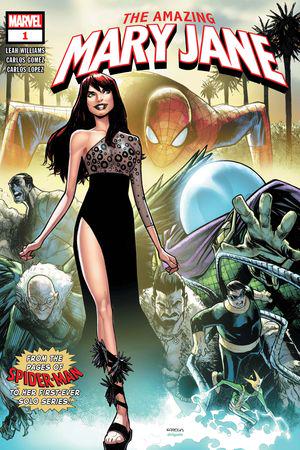 Mary Jane is on her own and doing what she loves, starring in a big budget movie. Unfortunately, there are several red flags on display around the production.

With her life firmly in her own hands, Mary Jane Watson decides that something isn’t right about her character in this new film and the fact that the director keeps avoiding her. When she finally confronts him, he reveals himself to be Mysterio and rather than walk off the film, MJ decides to let him know that his writing of her character stinks.

With the two of them in agreement about the direction of the film and her character, Beck shows MJ around the set and tells her about everything that he is doing to create his magnum opus. The fact that actual villains are mixed in with the production staff is an issue, but not one MJ is particularly worried about. Unfortunately, while she and Peter talk about their relationship and get closer over the phone, the production gets some attention neither MJ or Beck want or expect.

This was a fun first issue. I thought the premise was strange, but Williams writes it in a way that takes away the seriousness without making it campy. I found the story enjoyable and the pace of the plot to be fun and light. Carlos Gomez complements that tone with some impressive and beautifully detailed art. A fun issue that makes me want to read what’s next.