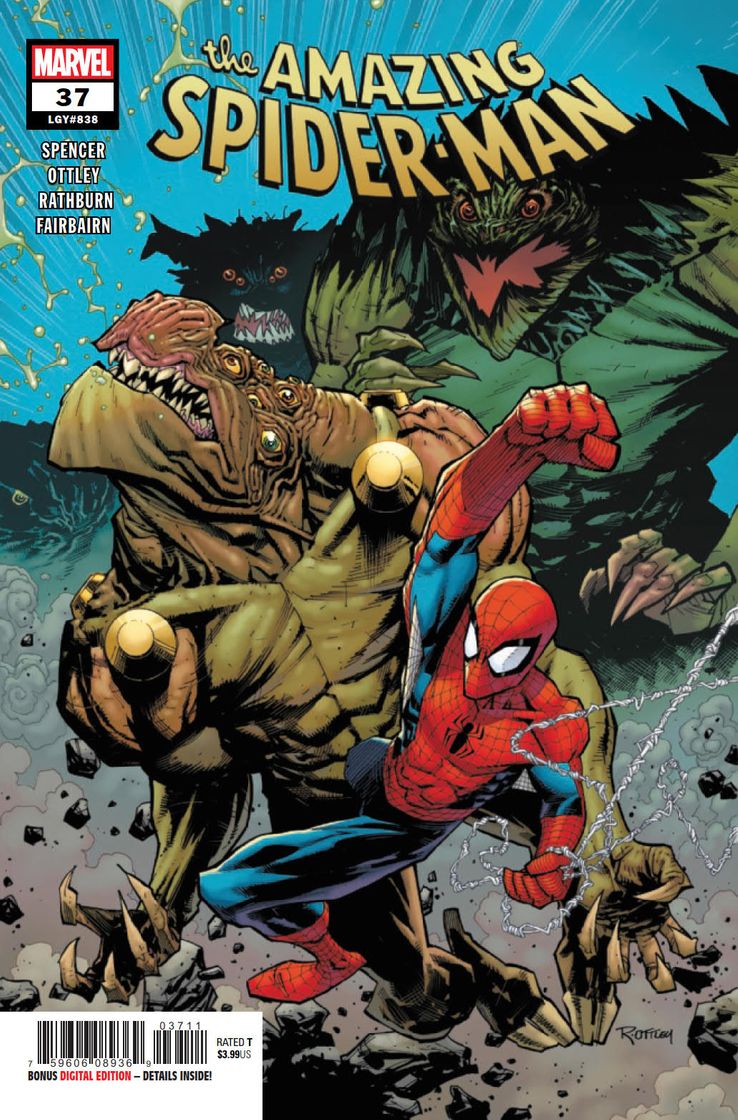 Welcome to the interlude. After a twisting story arc about international arms dealers and an assassination attempt on Doctor Doom at the UN that led to an invasion of Doombots only to discover that the Doombots were under the control of a rival nation to Latveria, Spider-man #37 scales back the scope of the story to allow Spider-man a moment of rest, literally. The result is a quiet issue with nice moments of character development between Peter and Mary Jane.

Writer Nick Spencer creates an issue with essentially three separate short stories. A new job opportunity for J. Jonah Jameson’s hints at a potential conflict for J.J.J.’s personal feelings and knowledge about Peter as Spider-man. Then Spencer gives Peter Parker some quiet moments with M.J. through the predictive use of a new experiment at Empire State. Spider-man uses the multiverse predicting device to prevent traditional super hero interactions like bank robberies and apartment fires in order to have a night at home watching TV with M.J. over video chat. The final story continues the looming threat of Spencer’s demonic villain, Kindred.

Have you seen this:
Godzilla Vs. Kong (Review)

The Peter Parker / Mary Jane story is the core of the issue and provides readers the opportunity to reconnect with him as a person. One of Spider-man’s strengths as a character is that he is identifiable. Carving out time from life as a super hero to spend time doing something small like watching the finale of a reality show, prioritizes the cultivation of their relationship and reminds readers of the human side of Spider-man. This allows Spencer to have some fun with the dialogue and allows Peter and readers a moment to catch their breath between conflicts.

Ryan Ottley returns as artist as an interlude from Patrick Gleason’s work during the last arc. Ottley’s body positions during the Spider-man scenes provide a sense of movement and his framing during J.J. Jameson’s conversation includes some aggressive pizza eating. The art is solid and connects Gleason’s last arc with the ongoing threat of Kindred.

After Nick Spencer’s last arc, he provides a brief palate cleanser with a few appetizers for the coming story. The issue is a nice break in the action, but ultimately minor in the scope of the ongoing storylines. The result is a needed, but quickly consumed issue bridging major arcs in Spencer’s ongoing run.