The Batman Who Laughs #1 REVIEW 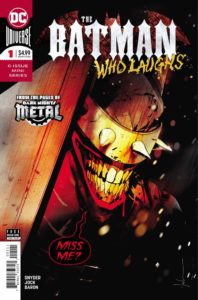 The Batman Who Laughs #1
DC Comics

The Batman Who Laughs #1 is one of the few things I’ve ever read that can be summed up in one word: WOW.

Maybe one word isn’t enough, but you get the point. Scott Snyder continues his hot streak with this brilliantly terrifying character. Initially, it seemed as if this might be a story about The Batman Who Laughs back when he was Batman, or might provide more detail on his process of turning into The Batman Who Laughs.

That was obviously not the case. Now we’ve got a dead Bruce Wayne, who was apparently happy-go-lucky in his reality, though dead. Then a Batman who uses guns now nicknamed “The Grim Knight.” Obviously, there’s the Batman Who Laughs from the battle with Barbatos, and Batman, who is also now a Batman that Laughs.

I have no idea how Batman (the second Batman Who Laughs) wins this in the manner his normal self would want. We saw in the Metal run The Batman Who Laughs was just like this Batman prior to being infected by Joker’s extra-toxic gas. Although, he was the one to kill the Joker, causing him to turn. In this instance, the Joker killed himself in order to somehow “help” Batman. He may be right—and this is far from a selfless act—but at what cost will Batman win this? Hopefully, he finds a way to control this and doesn’t go after Alfred or anyone else.

Regarding the Bruce Wayne who’s already dead, his significance remains unclear. It seems like Batman (the good, living one) is confident in his assessment: the Bruce gave up the Batman life and for a regular one, and was happy. The Batman Who Laughs brought his dead body one into the fray, I have no idea what the symbolism is behind it.

Lastly, Jock’s artwork, combined with David Baron’s coloring, is perfect for this story. Their dark, raw edge is perfect for this story. As much as The Grim Knight’s spree was awesome, the best page was the return of The Batman Who Laughs. So dark, so vicious. His presence alone is enough to send a shiver down your spine. And it sends one message: things are about to get real.